On July 20, 1969, Apollo 11 became the first manned space mission to successfully land on the surface of the Moon. To celebrate the 50th anniversary of this event and reflect on the history made that day, here are five lesser-known details about Apollo 11 and the lunar landing.

The Race to the Moon

The main objective of the Apollo 11 mission was to send a manned spacecraft to the Moon, and safely bring it back, by the end of the decade — a goal set by U.S. president John F. Kennedy on May 25, 1961.

The launch of Apollo 11 was watched in person and on television by many Americans, and whether you witnessed the event or not, many details are widely known. For instance, the two astronauts who walked on the moon were Neil Armstrong and Edwin (Buzz) E. Aldrin Jr. You might have heard about them planting an American flag and making “…one small step for a man, one giant leap for mankind.” However, there are many more lesser-known details about this mission. 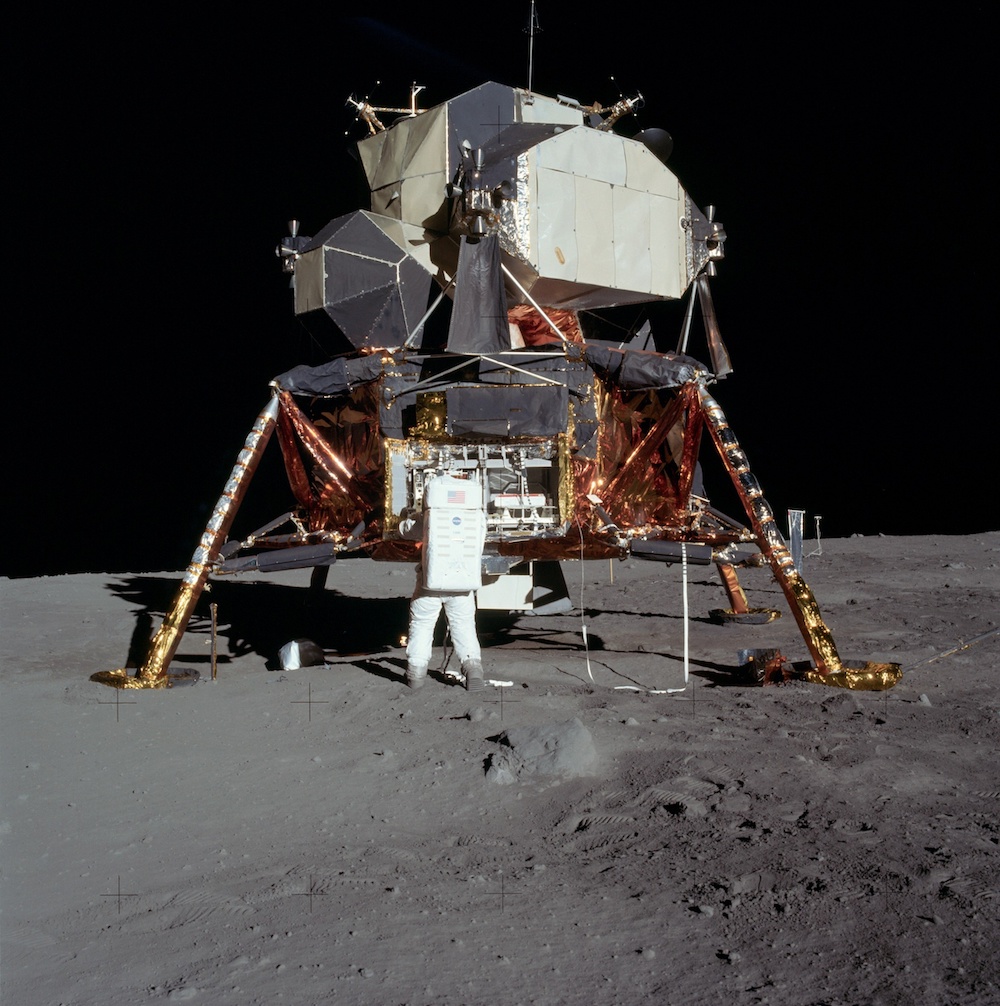 Buzz Aldrin outside the module on the surface of the Moon. This file is in the public domain in the United States because it was solely created by NASA. NASA copyright policy states that “NASA material is not protected by copyright unless noted”. (See Template:PD-USGov, NASA copyright policy page, or JPL Image Use Policy.) Image via Wikimedia Commons.

1. Preparations for the Trip Took 8 Years

When President Kennedy announced his goal for the U.S. to reach the Moon in 1961, the equipment and tools required for such a mission were not yet available.

In the Apollo program, NASA used integrated circuits (now known as computer chips) and also implemented real-time computers on the Apollo spacecraft. Although these two technologies are now widely used, they were new concepts at the time, and it was risky to trust new ideas with the safety of human lives.

It took eight years to develop and test the equipment needed for a successful moonwalk. On July 20, 1969, the Apollo 11 lunar module successfully landed on the Moon and crew members stepped onto the lunar surface. Apollo 11 accomplished Kennedy’s goal with just five months to spare.

2. A Plaque Accompanied the Flag

In addition to planting the American flag on the lunar surface, Buzz Aldrin and Neil Armstrong also left a plaque signed by President Richard Nixon. The plaque included a map of the Earth and was inscribed with the words:

FIRST SET FOOT UPON THE MOON

WE CAME IN PEACE FOR ALL MANKIND

Though the material of the flag didn’t hold up against the Moon’s atmosphere, the plaque provided a lasting commemoration of the mission.

In 1969, software was still a relatively new discipline of engineering. Another new concept: women working as engineers. On the day of the Apollo 11 launch, history was made in another way by Margaret Hamilton. Margaret Hamilton was self-taught in coding, but eventually went on to direct the software engineering program at the MIT Instrumentation Laboratory, which would develop software for the Apollo program. Hamilton led the team of engineers that authored the code that made the launch possible, forging new paths for women seeking careers in engineering and aeronautics in the process. 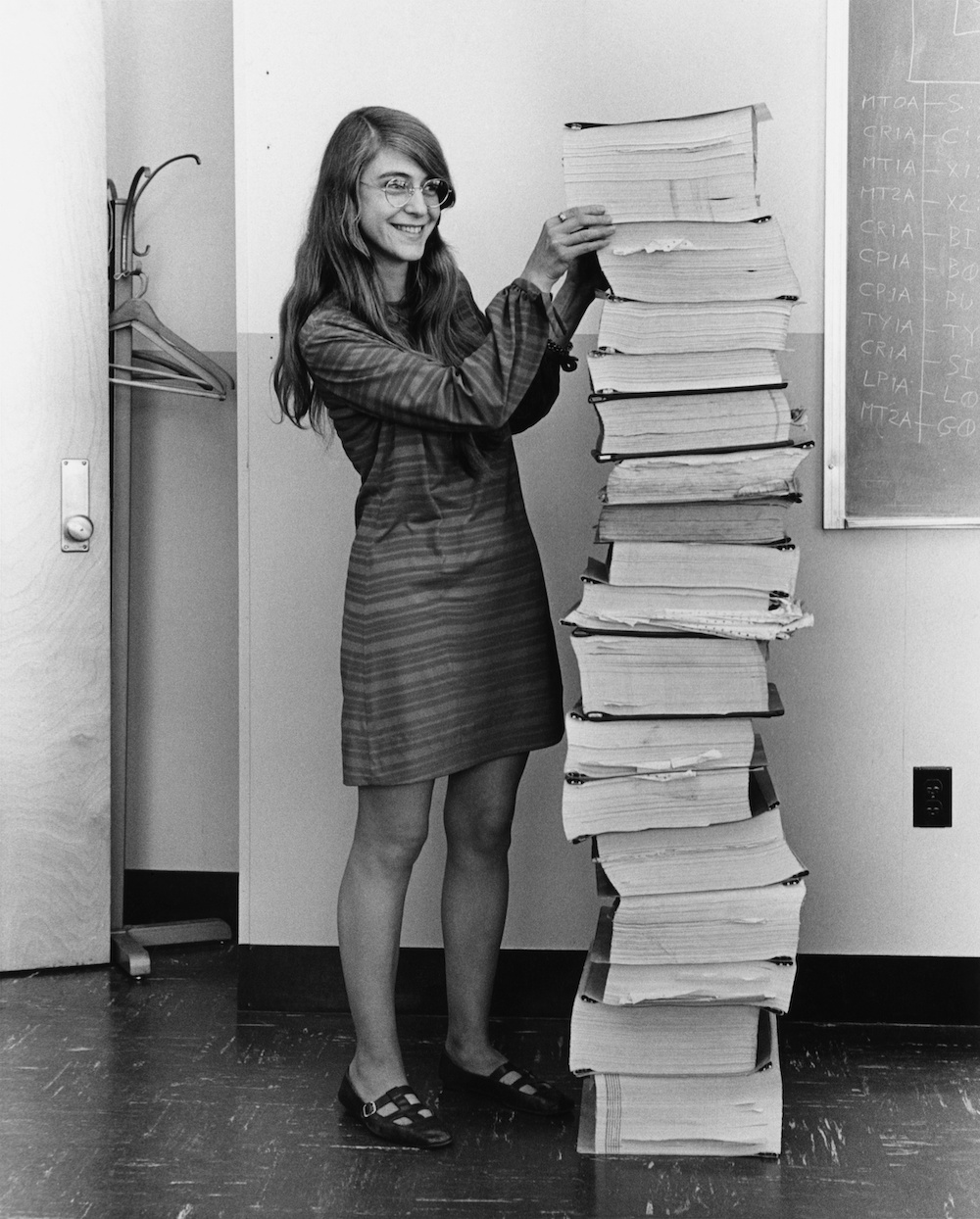 Margaret Hamilton with the stack of code that helped Apollo 11 reach the Moon. This work is in the public domain in the United States because it was published in the United States between 1924 and 1977 without a copyright notice. See Commons:Hirtle chart for further explanation. Note that it may still be copyrighted in jurisdictions that do not apply the rule of the shorter term for US works (depending on the date of the author’s death), such as Canada (50 p.m.a.); Mainland China (50 p.m.a., not Hong Kong or Macao); Germany (70 p.m.a.); Mexico (100 p.m.a.); Switzerland (70 p.m.a.); and other countries with individual treaties. Image via Wikimedia Commons.

Engineer Frances “Poppy” Northcutt was the first woman to work in an operational support role in NASA’s Mission Control Center in Houston, Texas, during the Apollo program. She was part of the team that specialized in trans-Earth injection. This team helped maneuver the spacecraft on its course back to Earth.

Michael Collins rounded out the crew on Apollo 11. He played an important, but sometimes overlooked, role: getting the crew home.

Collins was the command module pilot. He knew there was a chance that the lunar module could crash into the Moon’s surface with Aldrin and Armstrong inside, or something else could go wrong and he would have to return to Earth alone. Fortunately, the mission was a success.

5. The Crew Was Quarantined After Returning to Earth

Scientists were unsure about the risks of Moon travel and debated over how to best protect Earth from the potential contamination brought back with the astronauts. To be safe, the crew was kept in isolation for three weeks after they returned to Earth. When the crew declared their Moon rock and dust samples at U.S. Customs, they even wrote “to be determined” on their forms when asked about any condition onboard that could lead to disease. They were given biological isolation garments and taken to a mobile quarantine facility, shown below. 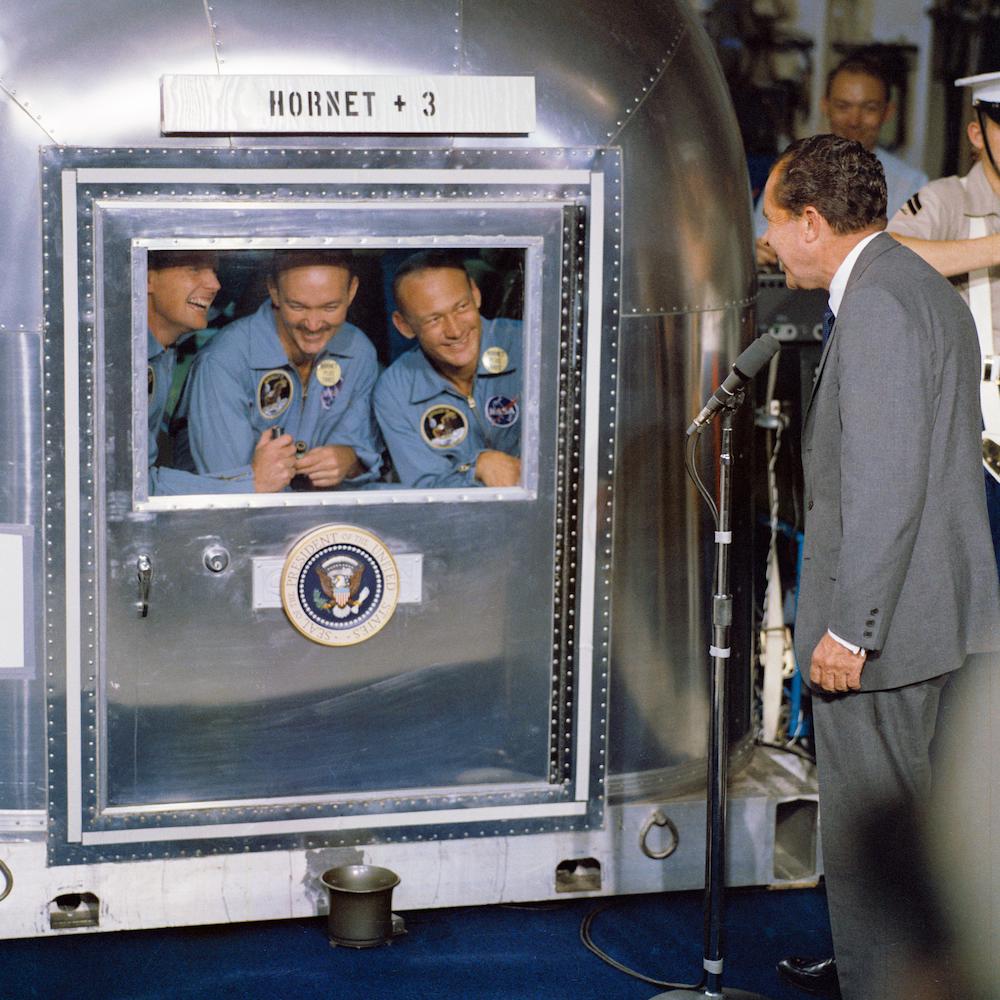 President Nixon greeting the Apollo 11 crew upon their return. This file is in the public domain in the United States because it was solely created by NASA. NASA copyright policy states that “NASA material is not protected by copyright unless noted”. (See Template:PD-USGov, NASA copyright policy page or JPL Image Use Policy.) Image via Wikimedia Commons.

Aldrin, Armstrong, and Collins stayed in the mobile quarantine facility, a converted Airstream trailer aboard the USS Hornet aircraft carrier, before being transported to Pearl Harbor. Three weeks later, they returned to Houston.

The lunar landing was a giant feat for engineering and programming, as well as “one giant leap” forward in the field of space exploration. Apollo 11 and the rest of the Apollo program created a lasting legacy that is worthy of a celebration.