When I was little, I used to love spending the night at my grandparents’ house, where I was allowed to watch TV, stay up late, and in the morning, help my grandmother make pancakes. The hardest part was always waiting for her old, slow electric burner to heat up — to my six-year-old self, it seemed to take hours for the burner to become hot enough after we’d finished mixing the batter. Luckily for me, and for other impatient chefs out there, there is now a faster, safer option: the induction stove. 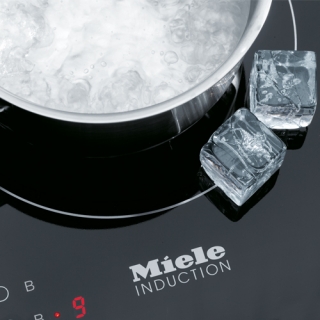 With an induction stove top, the pot becomes hot, while the
stove’s surface remains cool to the touch.

A History of Induction Stove Design

Although the first induction stove patents date back to the 1900’s, the first designs didn’t appear on the market until the 1970’s, and they were lacking in many ways. They were slow to respond to temperature adjustments, noisy, expensive, and still had improvements to make in energy efficiency. Today, induction stoves have come a long way, offering ample improvements over the first models.

In an article that I wrote recently for this year’s COMSOL News, “Multiphysics Simulation Helps Miele to Optimize Induction Stove Designs”, I learned about how COMSOL Multiphysics was used by Miele researchers to improve their induction stove designs. I had the opportunity to speak directly with Christian Schröder from mieletec FH Bielfeld (a joint laboratory between the University of Applied Sciences Bielefeld, Germany, and Miele & Cie. KG), and hear about the interesting ways they employed the multiphysics approach in their simulations. Christian had quite a lot of interesting design experiences to describe, and my interview, which was scheduled for only 30 minutes, ended up lasting over an hour and passing by in a flash.

During the interview, I learned about the physics involved in their design. Induction stoves utilize induction heating to warm the contents of a pot or pan. An alternating current (AC) is passed through a copper coil located underneath the stove top in order to generate a magnetic field inside the metal of the pot. This magnetic field creates eddy currents, which in turn heat the metal of the pot through the Joule heating effect. Unlike traditional gas or electric stoves, which use conduction to heat the stove first and then the pot, an induction stove heats just the metal of the pot itself. This leaves the stove top cool to the touch — which would have been a much safer design for a young chef like me — and easier for clean-up as well, since food doesn’t get cooked on its surface. In addition, induction stoves tend to be faster and are capable of boiling a pot of water in less than half the time it takes on an electric stove.

During the interview, Christian also explained a few interesting design challenges that the mieletec researchers faced when analyzing their prototypes. For example, before optimization, the system emitted a high-pitched noise due to the frequency of the electrical current that is passed through the copper coils. In order to solve this problem, Christian and his team of researchers used COMSOL Multiphysics to find a frequency of the alternating current and a coil geometry that produced the least noise possible.

The magnetic fields produced by the electrical current also caused another interesting phenomenon — the magnetic interactions between the pot and coils caused the pot to move around on the stove top. Using COMSOL Multiphysics, mieletec engineers found a set-up that balanced the magnetic forces acting on the pot, ensuring that it would remain stationary on the stove top. 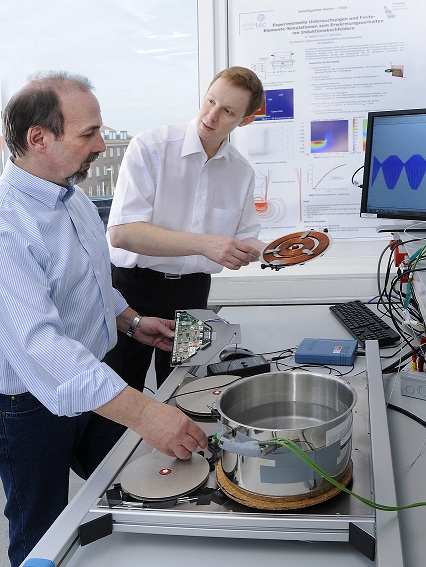 Set-up of a test campaign performed by staff scientists Werner Klose (left) and Mikhail Tolstykh (right). Because the stove top has been removed, you can see the internal workings of the stove, such as the geometry of the copper coils.

Simulation Cooks Up the Perfect Pancake

One aspect of the trial and verification process that I found interesting was the way the final design was tested: using a pancake! Mieletec researchers used a standard breakfast pancake to determine if heat is evenly distributed across the surface of the pan — if the pancake comes out burned in some places, and under-cooked in others, then they know that the stove has not been properly optimized. There is even a German authority on consumer goods, Stiftung Warentest, that rates many consumer stove brands based on this “pancake test”. Stiftung Warentest concluded that their induction stove design is up to par, and able to cook up a perfectly browned, delicious pancake. And the best thing about an induction stove is that, with the combination of the stove’s speed and temperature precision, I know that it won’t take as long as my grandmother’s old electric burner to heat up to the perfect temperature for the pancakes I still love to eat at her house.