Imagine a vehicle where you could simply plug in a destination and arrive without ever having to touch the steering wheel. Fully autonomous cars would revolutionize society, benefiting those who already drive and increasing the mobility of those who can’t. While technological advancements have brought us closer to such a reality, there are still many challenges to overcome. Today, we’ll explore the future of autonomous cars and what needs to happen before they can become a viable option.

Every year, the International Microwave Symposium (IMS) brings together researchers and engineers from around the world, giving them a preview of what’s up and coming in the RF and microwave industries. While attending last year’s event, my colleague Jiyoun Munn noted that there was a lot of buzz surrounding 5G and the Internet of Things (IoT). Throughout the science and engineering community, this sentiment has rang true, with various research in the works to advance the potential of these innovative concepts.

I recently had a chance to speak with Jiyoun about his experience attending IMS2016. During our discussion, he mentioned a technology that was referenced as a point of focus in the RF and microwave industries in the year ahead, one that could have large implications: autonomous vehicles. 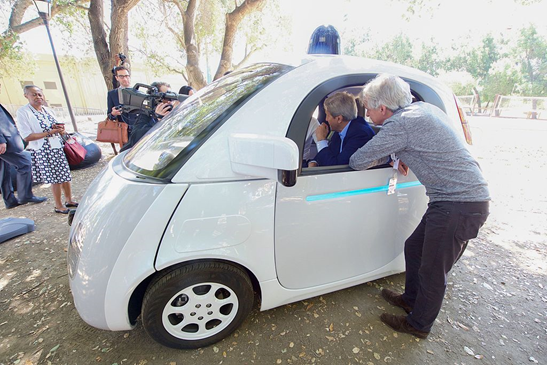 A self-driving car with U.S. Secretary of State John Kerry inside. Image in the public domain, via Wikimedia Commons.

Fully autonomous cars would essentially change all aspects of driving. People with disabilities that prevent them from driving could now travel on their own. Those who already drive, meanwhile, would have more time to dedicate to other tasks, while using less gas and staying safer.

Self-driving cars would also have a significant impact on our roads and highways. Faster reactions, for instance, would reduce the need for greater distance between vehicles as well as overall traffic. This, in turn, could enable more cars to be on the road and allow for higher speed limits. Further, since these cars would automatically stick to the speed limit, police officers would no longer have to patrol highways, giving them more time to focus on other types of crime.

Bumps in the Road to Developing Fully Autonomous Cars

But what does it mean for a car to be fully autonomous? The National Highway Traffic Safety Administration has set out guidelines for classifying automation levels in vehicles. You can find a summary of these different levels highlighted below. 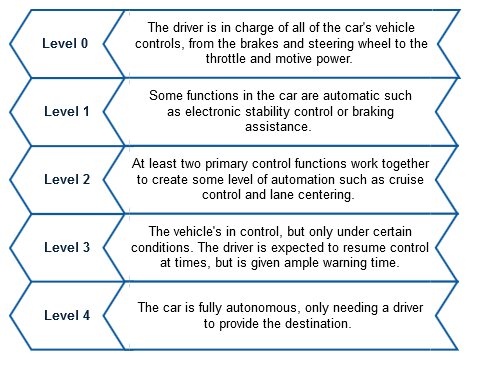 The Society for Automotive Engineers (SAE) has put together a similar list, which you can view here. SAE’s standards include an additional level for cars that can drive only in specific situations, but are able to maintain control if the human driver doesn’t respond appropriately to a request to intervene.

While some semiautonomous cars are already on the road, there are still challenges that must be overcome before fully autonomous vehicles can become a reality. Let’s have a look…

Addressing the reliability and security of a fully autonomous vehicle presents various challenges. While laws don’t necessarily exclude these cars, they don’t directly address them either. So far, only 16 states have introduced legislature regarding autonomous vehicles. For autonomous cars to move from the testing phase to widespread use, more states have to pass laws that not only permit them on the road, but also account for who is liable in the case of an accident.

There’s also the question of privacy as the software needed to automate cars would have access to a lot of information about their drivers. Anything from their preferred coffee shops to their location at any given time could be stored. While this is convenient for the driver, the car companies would have access to such data as well. How can this information be used? It’s a question that the companies and lawmakers must decide on.

Getting the Technology Up and Running

There are several challenges to consider as well when it comes to the reliability and security of the car’s software. Autonomous vehicles run on complicated software, which, like any other electronic device, can crash. Unlike other devices, this would put the driver in a dangerous and potentially life-threatening situation. The software itself can also be hacked, which could lead to anything from cars being held for ransom to the hackers remotely driving vehicles.

For the actual design of autonomous cars, companies are using some combination of LIDAR, radar, and stereo cameras to “see”. LIDAR provides a 360° view using lasers and is the most precise of the three technologies, but the sensor can be easily tricked and its accuracy is compromised in weather such as heavy rain, snow, and fog. Radar and cameras are more limited in scope, but the first measures relative speed and range, while the second recognizes when objects are moving laterally in front of a vehicle. An image taken by LIDAR, showing the road contour, elevation, and vegetation. Image by Oregon Department of Transportation — Own work. Licensed under CC BY 2.0, via Flickr Creative Commons.

Along with the sensors, autonomous vehicles also need a GPS to navigate to the driver’s intended location. While we use this technology on a regular basis, a GPS depends on its map’s accuracy. If you’ve ever had one tell you to turn the wrong way on a one-way street or to use a park’s walkway as a road, you can imagine what might happen if cars relied solely on this system. Additionally, we need a GPS that provides real-time updates to account for closed roads and construction.

Most importantly, though, is that these cars actually reach Level 4 automation. A car this advanced could distinguish between potholes and plastic bags as well as know to avoid one and ignore the other. If a pedestrian suddenly moves into the street, the car must decide whether to brake or swerve out of the way. Making the jump to Level 4 means developing software that encompasses all possible driving situations and then, once this software is in place, considering how to reduce the expenses of such vehicles.

Paving the Road to Success in the Design of Autonomous Vehicles

While a built-in chauffeur is still a long ways away, there have been many significant advancements in autonomous technology over the years. Cars are now equipped with the ability to automatically brake, maintain speeds, stay centered in a lane, and park themselves. With so many companies in the midst of designing autonomous cars, there is great promise that this technology will continue to advance until full autonomy is achieved.

With a better understanding of how the technology works, multiphysics simulation can serve as a powerful tool for advancing the design of autonomous vehicles. Sensors, for instance, are an important piece of the puzzle. Through modeling, we could test changes to the sensor’s design and placement in the vehicle, determining the configuration and location that delivers the optimal performance. We look forward to the continued improvements in autonomous vehicle design and simulation’s potential in helping to further its performance and capabilities.

Learn More About Optimizing Automotive Design and Technology with Simulation