We’re excited to announce that COMSOL News 2014 is now available, which features stories about the cutting-edge research of engineers and scientists working in a variety of application areas around the globe. This year’s edition of the magazine provides insight into how multiphysics simulation can empower product development and help companies to stay ahead of — and create — new market trends. How is this achieved? Check out the magazine to learn more about innovative simulation techniques.

Multiphysics Simulation Throughout the Design Process

For example, multiphysics simulation is employed by engineers at Boston Scientific, who are revolutionizing medical device design by gaining the knowledge required to control the underlying release mechanism of drug-eluting stents. Their goal is to treat the plaque build-up in arteries by using drug-release rates customized to a patient’s individual needs. 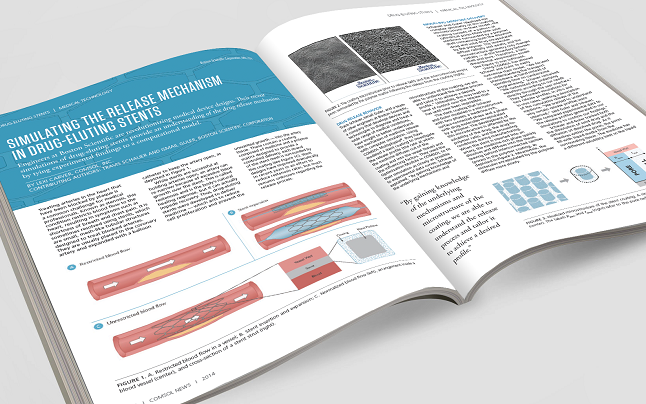 Turn to page 10 of COMSOL News 2014 to read the article by Boston Scientific called “Simulating the Release Mechanism in Drug-Eluting Stents”.

Moreover, researchers at Oak Ridge National Laboratory (ORNL) are currently in the conceptual phase of design, where they are testing new low-enriched fuel configurations for the High Flux Isotope Reactor (HFIR), one of the last nuclear reactors in the U.S. using highly-enriched uranium fuel. By utilizing multiphysics simulation and exploring different fuel configurations and fuel plate deflections, ORNL researchers are helping to develop a new HFIR core that will continue to produce the same flux of neutrons while utilizing low-enriched uranium fuel. By testing different conceptual designs, ORNL researchers can ensure that their final design will perform as expected.

For engineers at Boeing, multiphysics simulation helped investigate and verify the thermal expansion of composite materials used in metal foil for lightning strike protection on the Boeing 787 Dreamliner (which you can see featured in the cover of COMSOL News 2014). For this innovative jet airliner, comprised of more than 50 percent carbon fiber reinforced plastic, Boeing researchers evaluated the performance of such protective material over time.

Mentioned here are just a few highlights of the innovative work achieved by engineers and researchers that depend on the power and accuracy of multiphysics simulation. From building physics to tire pressure sensors and lab-on-a-chip devices and robotics, there are many exciting projects featured from many different application areas.

Get the full stories by checking out the magazine online.