Recently, I was given a copy of the book Finite Element Modeling Methods for Photonics, by B.M. Azizur Rahman and Arti Agrawal. This book proved to be a good companion to the RF Module and Wave Optics Module for graduate students starting in photonics and new users of COMSOL who would like a very targeted introduction to the field. The website accompanying the book comes with some sample computer codes used by the authors in simulation that readers can use (with citation). 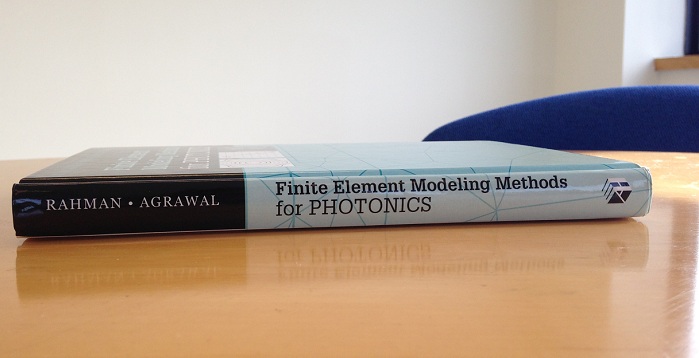 The book starts, as all good textbooks do, with an introduction to the governing Maxwell’s equations as well as the various frequency-domain forms that are commonly used: the full-vectorial and scalar form, the Beam Propagation Method (BPM), slowly varying envelope approximation, and paraxial approximations.

The second chapter is the lengthiest, and introduces the finite element method in detail for both frequency domain and eigenvalue analysis. A lot of these details are at a very low level, perhaps more than is needed by the typical COMSOL user. However, the information here is sufficient for a student to write their own finite element code from scratch, which I always advocate for people who really want to understand the inner workings of the software. It is also nice to see that practical issues like mesh refinement and the practicalities of limited computational resources are addressed, since we cannot always solve all problems on a supercomputer!

The third chapter addresses the application of the finite element method to the BPM. This chapter will be less useful to the COMSOL user, unless they want to implement the BPM themselves using the software’s equation-based modeling capabilities. We at COMSOL have instead chosen to implement the beam envelope method, recently released with the Wave Optics Module. We look forward to seeing the authors extend this book to discuss this formulation — a natural extension of what is already presented.

The fourth chapter addresses time-domain finite element modeling. This chapter is quite short, as the second chapter has already laid most of the foundations. Here, it would be nice to see more of a discussion of the various time-marching algorithms, but the extensive references provide good starting points for further investigations.

The fifth and sixth chapters introduce a few practical applications of what we would call multiphysics analysis; incorporating thermal and stress effects into a model. Nonlinear examples are also presented, and directions for further work are suggested.

In summary, Finite Element Modeling Methods for Photonics is useful for those who would like a very focused introduction to the mathematical and numerical concepts behind the RF and Wave Optics modules, and it is nice to see that the authors have written the book with that purpose in mind.

Learn more about the textbook directly from the author in this interview:

You can also download sample chapters of the book from the website of the publisher, Artech House.

Highlights from the COMSOL Conference 2019 Cambridge