What if this Halloween you could take your costume to the next level and turn yourself invisible? There are bounds of references to invisibility throughout fairy tales, folk lore, and pop culture. From capes and hats to cloaking devices, many fictional characters have been provided with a means for rendering themselves invisible. In the spirit of Halloween, let’s have a closer look at cloaking from a fictional and scientific stand-point.

As kids, I’m sure most of us at one point or another dreamed of becoming invisible. I know I did. The things we would be able to do if no one could see us… Sneak out of the house, have another cookie, or play pranks on those around us. Invisibility has long fascinated many — in plenty of cases even beyond the childhood years.

Greek mythology features a cap of invisibility as possessed by Hades, and some renditions of the Perseus myth proffer such a cap as the means for sneaking up on and ultimately slaying Medusa. J.K. Rowling outfitted her popular main character Harry Potter with a cloak of invisibility in order to allow him to sneak around the school. Similarly, Frodo in the Lord of the Rings cloaked himself to hide from enemies. In Star Trek the Klingons and Romulans disguised entire ships by using cloaking devices. Quite the trick for remaining under the radar of enemies! 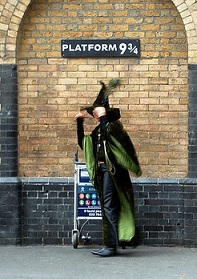 Of course these cloaking devices and apparel are fictional. If your child decides to dress up as Harry Potter tomorrow, you can’t provide him with a cloak of invisibility (and what a relief!), nor would you be able to cloak yourself as any of the other characters as part of your Halloween costume. But we’ve talked about cloaking before, and as you will see, cloaking is not only a fictional topic, but increasingly a research topic as well.

You can’t talk about cloaking without mentioning metamaterials. Metamaterials are artificially produced and consist of properties that are not found in nature. When it comes to these materials, it’s not what they are made up of that matters, it’s how they are structured. When properly arranged, and with the right shape, size, geometry, and orientation metamaterials can affect light or sound waves in an unusual fashion. The permittivity and permeability of these materials can vary with direction and position, and in some cases the refractive index may even be negative.

When surrounding something with metamaterials, it becomes invisible. In terms of optical cloaking that refers to guiding light and electromagnetic waves around the object that is intended to be concealed. Thermal cloaking, involves protecting nanoelectronic and microelectronic devices from thermal diffusion. In this case, thermal waves are guided around the object. Finally, there’s acoustic cloaking. Again, this type of cloaking is all about concealing an object in some way by distorting surrounding waves, but this time it deals with acoustic waves. 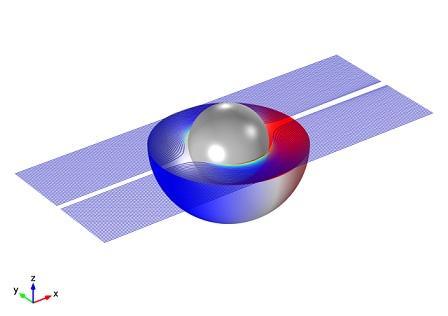 Ideal cloak. Model of a concentric spherical shell concealing a smaller sphere inside. The light waves bend around the smaller sphere, thus rendering it invisible.

Although you won’t be able to turn yourself invisible just yet, it’s inspiring to see a lot of research conducted on cloaking.

How to Perform Lens Simulations Using the Wave Optics Module