Electrical engineer, mathematician, and inventor Charles Proteus Steinmetz wrote volumes on the theory of alternating current (AC) that are still used to educate engineering students today. He also developed a fundamental law of magnetism — the “law of hysteresis” — and was granted more than 200 patents.

A New Name and a New Law

Charles Proteus was born Karl August Rudolph Steinmetz on April 9, 1865, in Poland. As a young boy, he excelled in his studies and showed great aptitude in math, physics, and literature. In 1883, he started pursuing a degree at the University of Breslau (which is now the University of Wrocław).

Because of Steinmetz’s involvement with a local socialist newspaper, which could have gotten him arrested, he fled to Switzerland, and then New York, in 1888. Charles Proteus Steinmetz, who had hereditary dwarfism and hip dysplasia. Image in the public domain in the United States, via Wikimedia Commons.

In America, Steinmetz was offered a job by his friend and fellow engineer Rudolf Eickenmeyer at his company Osterheld and Eickenmeyer. Around this time, Steinmetz changed his first name to Charles, to sound more American, and his middle name to Proteus, after a character from Homer’s Odyssey.

While at Osterheld and Eickenmeyer, Steinmetz gained a positive reputation for his prowess in math and engineering. He was tasked with finding a way to run trolley cars via alternating currents as opposed to direct currents. AC can operate across larger distances, but could cause power loss due to the laws of magnetic hysteresis, or the delay in the change of a magnetic field each time the AC creating the field reverses.

In order to find a solution to the trolley car problem, Steinmetz dedicated himself to the study the laws of magnetic hysteresis. In 1892, he established the “law of hysteresis” or “Steinmetz’s equation”, which allowed engineers to calculate and minimize losses of power due to any magnetism in their designs. At the age of 27, he had solved a puzzle that had thwarted the likes of Thomas Edison and Nikola Tesla.

Steinmetz became very well known for his AC hysteresis theory and AC steady-state circuit theory, in which he devised a symbolic method of calculating AC phenomena. Through his research, Steinmetz made a complicated concept more accessible, which helped make the commercialization of the AC apparatus possible.

In 1893, Charles Proteus Steinmetz was hired by Thomas Edison to work for him at General Electric. During his time there, he studied the theory of electrical transients (changes in electrical circuits of short duration), particularly the phenomena of lightning. His experiments in transient theory helped him to better understand lightning and resulted in the first “man-made lightning”. Steinmetz also worked with traveling waves, which he used to develop several devices and protect high-power transmission lines from bolts of lightning. 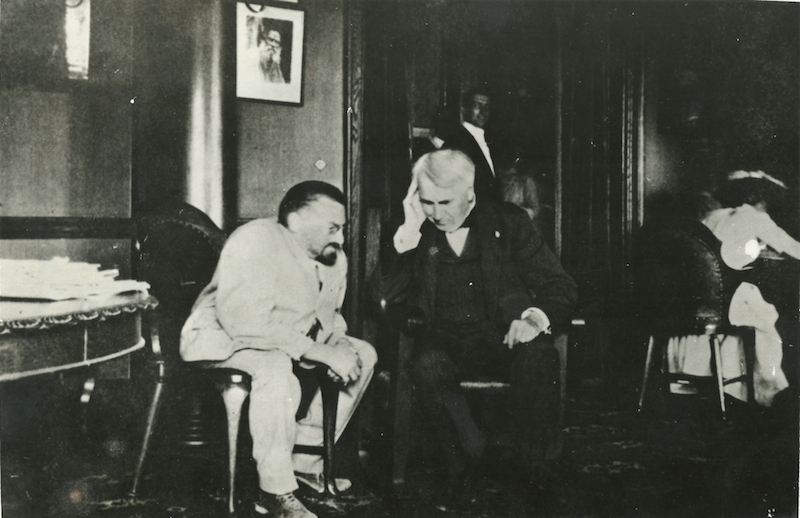 Steinmetz and Thomas Edison in the library of the Barcliff Lodge. Image in the public domain, via Wikimedia Commons.

Steinmetz helped to develop some of the first three-phase electrical systems in the world, including the first three-phase AC power systems, an efficient AC generator, and the metallic electrode lamp. He also made many contributions to the future of engineering, serving six years on the Schenectady Board of Education and chairing the Electrical Engineering department at the Union College, where he received an honorary PhD in 1903. 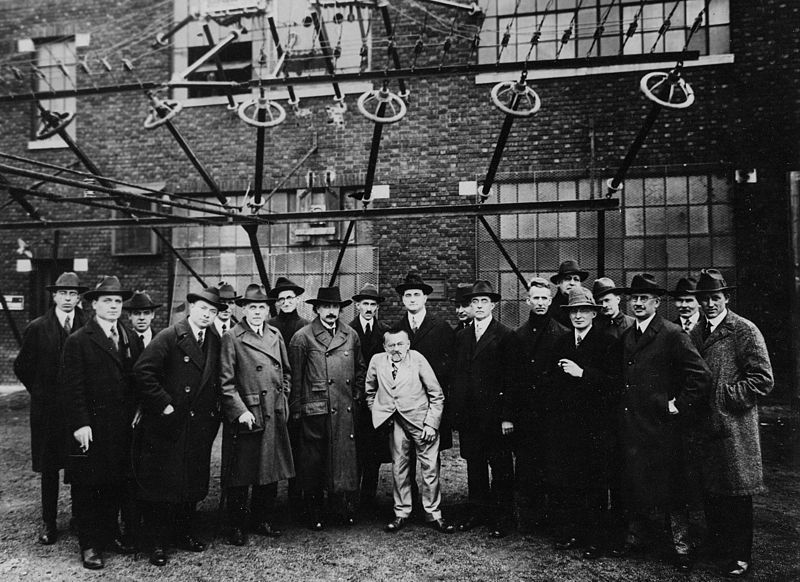 Albert Einstein being given a tour of the Radio Corporation of American (RCA); the group includes RCA scientists and engineers as well as scientists and engineers from the American Telephone and Telegraph Company, Western Electric Company, and General Electric — including Steinmetz. Steinmetz is standing in the center, with Einstein to his right. Tesla and Guglielmo Marconi are also in attendance. Image in the public domain in the United States, via Wikimedia Commons.

Steinmetz was the president of the American Institute of Electrical Engineering; received an honorary degree from Harvard University; and, in 1977, was posthumously inducted into the national inventors hall of fame.