About 13% of the world’s power is nuclear. During the 1990’s, this figure was almost 18%. This trend may continue to decline or undergo a renaissance, but in the meantime nuclear waste disposal remains a hot topic among engineers and governmental agencies. Safe procedures for the disposal of nuclear waste have been in place for decades, and continued improvement of these techniques remain in discussion today. 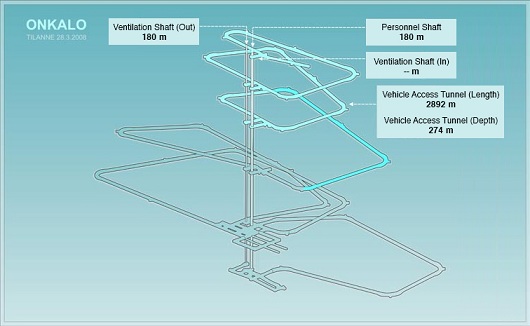 Schematic of a nuclear repository being built at Olkiluoto, Finland.

What’s noteworthy about nuclear power is that not a lot of the total energy in a fuel rod is actually utilized and turned into electric power. In fact, less than 1% of the total power generated becomes usable electricity. Therefore, the other 99% has to be treated or allowed to decay in a safe way. The best way to do this, economically, is to store it underground in stable areas for thousands of years.

Unfortunately, storing nuclear waste isn’t just a matter of putting it in a canister and placing that somewhere quiet and out of the way. To begin with, there’s the matter of the canister — what should it be made of to survive thousands of years? Finding a location for storage isn’t so simple either, since a place that’s quiet and out of the way now may not be so over the next few millennia. In reality, you don’t really know what’s going to happen during this very long time span, and the best you can do is mitigate possible risks. And what are those risks? Well, that’s also something that’s difficult to measure, since we don’t have a few thousand years to perform the experiments.

Simulation is the tool many scientists and engineers turn to in order to predict the risks associated with storing nuclear waste materials. Simulation allows them to look into the future and predict how a canister will hold up in the future, and what could happen if things went wrong. A story on page 16 of last year’s IEEE Spectrum insert, Multiphysics Simulation, titled “A Solution to Treating Nuclear Waste Comes Via Modeling and Simulation” described the design of these nuclear waste canisters. The engineers used modeling of heat transfer, structural mechanics, and chemical reactions in a coupled simulation in order to create an accurate model of the process. The team of engineers found that by using simulation as a virtual test platform, they could virtually test canister designs that would be both dangerous and costly to test in a real-world environment.

Now, on March 21st, COMSOL will be hosting a webinar that touches on the subject of nuclear waste disposal. Titled “Geochemical Processes and Subsurface Flows Simulations“, the webinar will discuss the topic of subsurface flow in general, and will also look in-depth at the geochemistry and possible spreading of nuclear waste from these canisters and repositories. Guest speakers Albert Nardi and Jorge Molinero of Amphos 21 will present their simulations of geological repositories for radioactive waste, and will show how important it is to include a thorough description of the geochemistry. In the webinar they will demonstrate how to do this by accessing PHREEQC, a program that calculates the thermodynamics and chemical kinetics of geochemical processes through COMSOL’s API.

Amphos 21 are experts in this industry and are collaborating with authorities in Sweden, Spain, and France on the issue. They are also specialists in simulating waste mining and the problems it causes. Be sure to tune in, as this is going to be an interesting webinar.