In the diagnostics industry, developing devices that enable autonomous testing is an area of focus. One such device that has been available commercially for many years is the lateral flow test. With its easy-to-use format and short turn-around time for results, this device has become a valuable resource in medical diagnostics. See how researchers at the University of Rhode Island have built upon this technology to facilitate the diagnosis of more complex conditions.

The Appeal of Lateral Flow Tests

Rapid diagnostic tests (RDTs) are valued in the medical field for their user-friendly nature as well as their ability to deliver quick results to patients. One RDT that you may be familiar with is the rapid strep test (RST). This test is designed to help diagnose strep throat, identifying if group A streptococcal (GAS) is present in the patient’s throat.

In one type of RST, a swab sample from the patient’s throat is placed on a nitrocellulose film strip. If GAS antigens are discovered, they will move across the film, forming a line of antigen bound to labeled antibodies. This method, which is the mostly widely used type, is referred to as the lateral flow test. 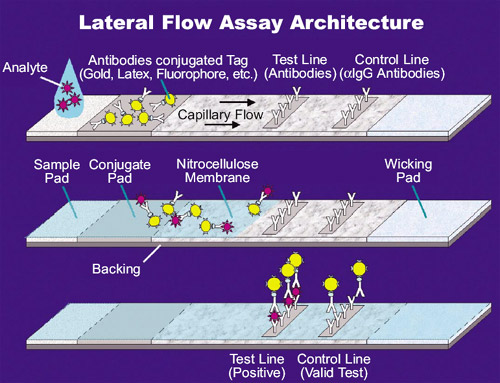 A schematic depicting the components of a lateral flow test. (In the public domain, via Wikimedia Commons).

The idea behind a lateral flow test is to find out if an analyte is present or absent in a sample without the use of expensive equipment. These simple devices are based on several capillary beds that are able to transport fluids naturally. The collected sample traverses a strip of paper, interacts with reagents that are firmly fixed in the surrounding mass, and generates a signal of color to indicate the test’s outcome. Such tests have been useful in various types of medical diagnostics, from home pregnancy tests to the RSTs mentioned above.

But, what about the more complex diagnostics? A challenge here has been the need to trigger multiple reagents at certain times within the process. A team of researchers at the University of Rhode Island has created a technology that enables exactly that.

Creating a New Form of Test Strips for Medical Diagnostics

The focal point of this new test strip design is the use of microfluidic valve technology. Comprised of multilayered paper that has been printed with wax, these new strips feature fluid-actuated valves that enable sample fluids and multiple reagents to be manipulated in an orderly and controlled manner. The valves create fluidic circuits, prompting the reagents to move in a particular sequence and at a certain time. In addition to decreasing the size of the test strip, the engineers at the University of Rhode Island have also added a micropump that allows fluid to move precisely through the microchannels.

In a study evaluating the potential of their design, the research team investigated the use of their technology in identifying a biomarker indicating sepsis. Sepsis is an immune response caused by an infection that results in a full-body inflammation. This study generated the identification of a biomarker showing that a patient was entering shock due to sepsis.

What Does the Future Hold?

With a growing shift from lab-based testing to autonomous diagnostics, this new form of test strips is well suited to the direction in which the diagnostics industry is moving. This technology would allow patients to accurately perform tests with multiple steps for immune detection — all at a low cost and without the help of trained professionals. Noted by its developers as the next generation of the lab-on-a-chip device, the paper-based platform has potential applications in numerous medical diagnostics, such as Lyme disease and malaria, as well as within the veterinary medicine field and for detecting environmental contaminants.