One of the questions we get asked often is how to learn to solve multiphysics problems effectively. Over the last several weeks, I’ve been writing a series of blog posts addressing the core functionality of the COMSOL Multiphysics software. These posts are designed to give you an understanding of the key concepts behind developing accurate multiphysics models efficiently. Today, I’ll review the series as a whole. 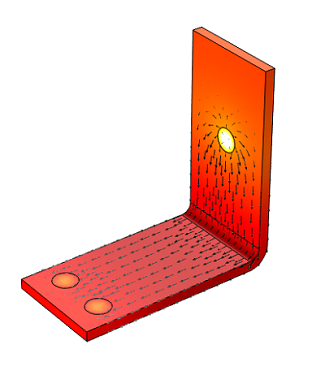 Coupled electro-thermal analysis of a busbar.

In the first part of this series, we introduced the concept of a linear static finite element problem, in terms of a single unknown. Although this example appears quite simple, it introduces the basic algorithm used by the software, talks about some numerical issues, and shows how we can interpret the log files. From there, it is a small step up to deal with problems involving more than one degree of freedom. Of course, as soon as we do so, we have to start thinking about the meshing of our geometry. In the second post we introduced the concepts of geometric and solution discretization, element order, adaptive mesh refinement, and how to perform a mesh refinement study.

From there, we addressed in more detail some of the issues that can arise in meshing. In particular, you always need to be aware that your model may contain singularities, which can be addressed in different ways. We also spoke about the various types of finite elements that you could use and why you would choose different element types.

Of course, the whole point of meshing is to get a model that gives accurate results, while still solving in a reasonable amount of time. It is also important to understand that different types of solvers can be used to solve the same problem, and we introduced the two classes of algorithms that can be used, and how the behavior of these solvers can tell us something about our problem set-up.

From there, we next spoke about meshing for nonlinear problems. This post concluded with a link to the Cooling and Solidification of Metal model, which is an example that was specifically written to demonstrate all of the techniques described herein.

Finally, the series was wrapped up with two blog posts. The first one was on solving of multiphysics problems, where we learned that solution techniques for such problems are conceptually almost identical to the techniques we learned about previously. The concept of a fully coupled and a segregated solution method was introduced, and their relative merits were addressed. From there, we finished up with the post Improving Convergence of Multiphysics Problems, where we talked about some approaches for improving convergence and alternative solution techniques.

Key Points from the Solver Series

This series of posts has been written for the express purpose of showing how to solve complex problems involving several physics. Whenever we are solving such problems, we need to keep in mind not just one, but all of the points discussed here, and how they can interact. Once you have mastered all of the information provided in the Solver series, your finite element multiphysics modeling will become more efficient and effective. Happy Modeling!

Very impressive review of how to solve the COMSOL Multiphysics problems more effectively. Here are two things I am concerned and would like to follow up based on your posts:

(1). The linear or nonlinear problems you mentioned are all “static”, based on my understanding, in steady state right? Would you have future plans to focus on if the problem is “unsteady state”, in which the parameters are time dependent?

(2). In the discussion of linear or nonlinear problems the force applied on a spring is always taken as an example along with fundamental equations. Does that mean any equations used in COMSOL physics can be re-organized to the form of fundamental equations mentioned in the spring case? If that is true can that be used as a criterion to judge whether the problem is linear or nonlinear?

Thanks again for your effort and time to post such helpful materials and I really appreciate.

Dear Terry,
You are correct in both of your questions. This discussion relates only to stationary, time-invariant, problems. (Although frequency-domain problems can also be treated as stationary in that they assume a sinusoidal time-variation.) We will work on a series of articles on transient problems in the future.

Have you released any articles on transient problems ? I couldn’t find anything related. I am using laminar phase field method to simulate water movement in a channel. It is basically a transient problem. I would like to see if I can implement adaptive meshing to reduce computational time. The error occurs mostly in the interface of two phase where the meshing should be fine enough. The rest of the domain with one pure phase can be left with coarser mesh.

Hi Ali,
We are continuously working on generating information on this, and many other, topics in this blog. Stay tuned and keep watching this space for updates as they are published!

Thank you for your interest in our blog. We will contact you via email with more information.