A Lithium-ion Battery Analysis at INES-CEA

During my time as a PhD student, a blue “Chemical Landmark” plaque was fitted to the building a couple of hundred yards down the road from my lab. The plaque commemorates the achievements of the researchers who made the lithium-ion (Li-ion) battery viable. Whether or not you know about the electrochemistry of rechargeable lithium-ion batteries, you probably rely on one. We carry them around in our phones and laptops, and ride in cars and planes that use them for power. Improving the efficiency and safety of such devices is big business, and it rests on understanding their chemistry and correlating it to experiment. Mikael Cugnet at INES-CEA in France used COMSOL Multiphysics to advance his team’s understanding of their battery experiments, considering the real effects behind electrochemical impedance measurements.

Lithium is an attractive material because of its tremendous specific energy capacity. You may remember from your school days the violent reaction of lithium with water. If you translate this willingness to react into electrochemical potential, you’ll see that a lithium-based battery gives you a higher voltage due to the electrochemical reaction than just about any other chemical substance. And at atomic number 3 it’s very light too, so there’s a lot of chemical energy available per unit mass. But rather than having the highly-reactive lithium metal available in the battery, the design ensures safety by using cathode materials in which the lithium ions are “intercalated”, such that the lithium ions exist in the chemical structure of another material.

In order to study and optimize the chemistry of his battery, Cugnet focused on an experimental technique called electrochemical impedance spectroscopy (EIS). This common and versatile technique is used to resolve the resistive and capacitive properties of an electrochemical system, by applying a fixed direct current and then superimposing a small sinusoidal voltage across the cell. As long as this applied oscillating voltage is small enough, the system properties remain linear, and so the current response oscillates harmonically at the same frequency as the applied voltage. It is these responses, evaluated through electrical impedance, that scientists use to measure many of the characteristics of the system, such as the electrochemical kinetics or the transfer of species to and from the electrode.

As Cugnet explains in his article in COMSOL News 2013, one disadvantage of the EIS experiment is that the results are not clearly correlated with the underlying chemistry. Normally, the measured behavior of the cell is described with an “equivalent circuit”, where an analogy is drawn to the impedance of an electrical circuit composed of ideal resistors and capacitors. However, the resistances and capacitances need to be fine-tuned and they do not fully represent the real chemical effects, like mass transfer and electrochemical reactions, that cause these phenomena.

By using a COMSOL Multiphysics model to predict impedances by solving a system of differential equations describing the various physical and chemical effects at work inside the battery, Cugnet was better able to understand the results of his experiments. What’s more, the model could be easily adapted to different frequencies or center voltages, revealing the chemical response of the lithium-ion battery under different power cycles. Visualizing concentration and current density profiles under diverse conditions makes clear the reasons why impedance spectra look the way they do, and so helps to make sense of the available measurements of a real battery system. Such a modeling approach allowed Cugnet to understand how well the different terms in his equations were able to mimic the behavior of the battery under investigation. 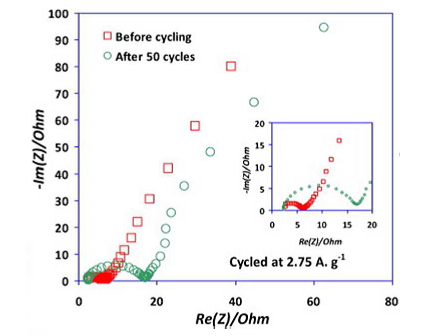 Using electrochemical impedance spectroscopy (EIS), battery impedance is measured at a range of frequencies in the milliHertz to kiloHertz range and displayed on a impedance plot.

Another interesting challenge in the work at INES-CEA is the complexity of the chemical interactions at the iron-phosphate cathode. This material has a microparticulate structure, so to understand the effects of diffusion of lithium into the individual particles, Cugnet used COMSOL Multiphysics to build a microscopic model of this process. He then coupled this small-scale model to a macroscopic model of the cathode and electrolyte. In this way, the influence of the local chemistry can be correlated to the overall distribution of current density. This type of chemical detail is critical to developing electrochemical devices, because the power extracted depends on it. 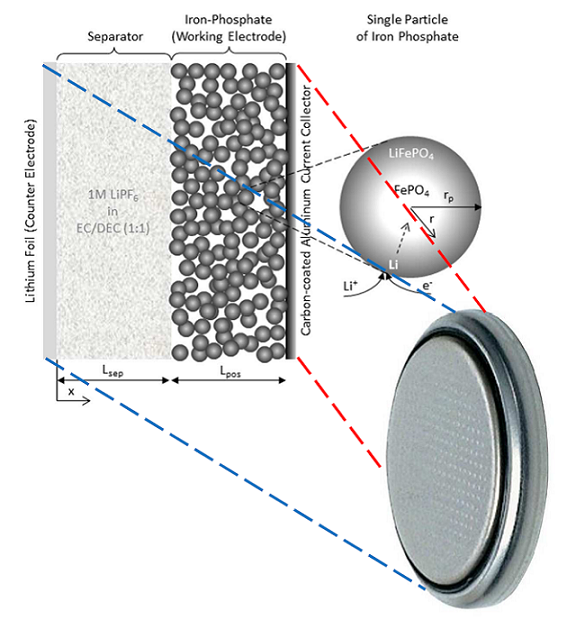 Model of the iron-phosphate cathode at the macroscopic (left) and microscopic (right) level.

It’s an interesting peculiarity of analytical techniques in electrochemistry that because you can only measure the total current or total voltage, a side-by-side simulation is often required in order to learn anything from your experiments! Experimental measurements are vital, though, to validate the simulation. In this case, the versatility of multiphysics modeling allowed Mikael Cugnet and INES-CEA to make progress in identifying the key points of a complex, multiphase chemical system. You can read about the full detail of the lithium-ion battery model in COMSOL News 2013, starting on page 44. 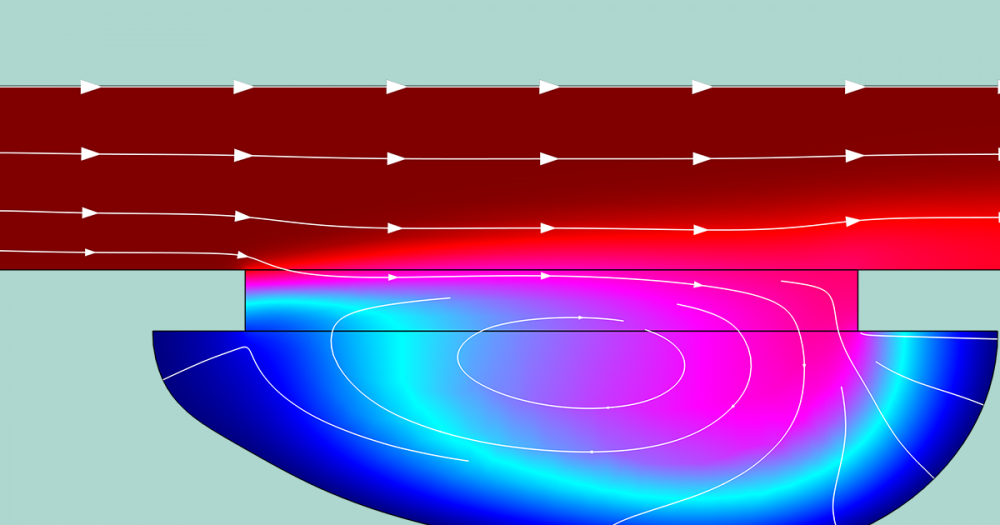 I’m a postdoc and I’m currently working on the fabrication and modeling of micro-supercapacitors. As you surely know, in such systems, the charges are stored at the electrodes both trough pseudocapacitive processes (charge transfer and fast reversible redox reaction) and in the form of electronic double layers. We are interested in modeling such phenomena for standard material like RuO2 electrodes with H2S04 as electrolyte. In the end, our goal is to study the effect of the electrodes geometry which mean that we would like to set up the model in 3D (interdigitated fingers).
Do you know if these physical processes can be modeled with COMSOL (using the battery and fuel cell module), is it likely to simulate cyclic voltammograms for such system?

Yes, you should use the Batteries & Fuel Cells Module for the situation you describe. We also have a specific study type for cyclic voltammetry as well as a few tutorial examples, such as: https://www.comsol.com/model/cyclic-voltammetry-12849.