Engineers and scientists are known to step up to the challenges posed by nature. After developing an understanding of how the current object or process works, the next step often includes figuring out how to manipulate the situation to improve said object or process. One such example is cloaking; controlling light and sound waves to render something invisible. Phys.org recently ran a story on progressive research on controlling magnetic fields via cloaking to harvest and transfer energy using a magnetic shell design with a hollow center. What they didn’t mention, was that the researchers used COMSOL Multiphysics in the process.

As we know, magnetic fields decay as the distance from the magnetic source increases. This notion is now challenged by the research of Carles Navau, Jordi Prat-Camps, and Alvaro Sanchez from Universitat Autònoma de Barcelona, Spain. They have figured out a way to harvest and concentrate magnetic energy and then transfer it through empty space, via transformation optics.

What Is Transformation Optics?

Transformation optics is simply the advancement in optical device design. By controlling light (electromagnetic radiation) an object can be concealed (cloaking). As I’ve mentioned before, cloaking is enabled via artificially created materials called metamaterials. It is by arranging metamaterials in a certain way that light or sound waves can be controlled. Via optical transformation such as this, conventional devices could be improved upon. That is just what Navau et al. hope to do with their magnetic shell.

Through the design of a magnetic shell, two scenarios can be realized. First, a single dipole magnet is surrounded by the magnetic shell allowing a second shell to then harvest the energy from the first and concentrate it into its own center. In this scenario (images a-c, below) the magnetic energy is transferred between the two dipole magnets. In the second scenario (images d-f), two dipole magnets could be surrounded by shells that discharge their energy, thus inducing magnetic coupling between the two dipole magnets. According to their paper, “Magnetic harvesting and concentration at distance by transformation optics”, COMSOL Multiphysics and its magnetostatics simulation tools were used to perform all the numerical calculations supporting the research. 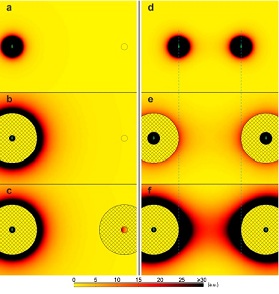 The shell that surrounds the magnet enhances the exterior magnetic field. This, in turn, enables the magnetic energy transfer through space — disregarding the natural decay of magnetic energy. Thanks to these two possible scenarios there are many potential uses of the magnetic shell. The energy concentration and transfer scenario could be used to improve motors, power plants, and the like. The ability to concentrate nearby magnetic fields could be useful in enhancing magnetic sensors (common in medical, industrial, and consumer electronics applications). Currently, concentration techniques involve superconductors, but by instead utilizing magnetic shells greater magnetic flux can be detected from external magnets.