A swashplate mechanism, used in a helicopter to control the pitch of the rotor blades, can be easily simulated using the Multibody Dynamics Module available in COMSOL Multiphysics. This module enables simulation of an assembly of flexible and rigid bodies, together with physical phenomena from fluid, heat, and electrical applications, among others. Here, we will show you a model to convey how a swashplate mechanism works and at the same time analyze the stresses and deformation in the flexible rotor blades.

How a Helicopter Swashplate Works

Modeling a Swashplate Mechanism in COMSOL

The animation above shows the workings of a helicopter swashplate mechanism.
Here, von Mises stresses are plotted on the surfaces of flexible rotor blades (the deformation is
magnified for better visualization). 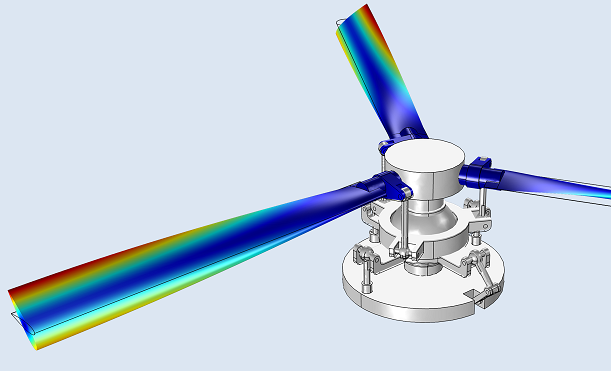 The torsional mode of flexible rotor blades of a helicopter swashplate assembly. The eigenfrequency
corresponding to this mode is close to 185 Hz.