There are many different routes through which drugs and other medications can be delivered into a patient’s body during treatment. These include topographical ointments, pills, vaporizers, and injection systems, among others. Many of these drug delivery systems require an enormous amount of precision when it comes to the location, timing, concentration, and amount of the drug to be administered. This is where simulation can be a big help, as it can allow for the modeling of each of these aspects of the drug delivery system. When it comes to drug delivery, ensuring that the proper dosage of the drug is administered is key.

In a drug dosing system, such as what might be employed by an intravenous (IV) therapy device, the concentration of the drug needed to be delivered into the bloodstream can be incredibly precise. In these systems, the delivery of a drug must be exact; even the smallest difference in amount could potentially inflict harm on the patient. In order to ensure that the correct dosage of a water-soluble drug can precisely and accurately be administered, we can use multiphysics modeling to analyze and optimize the system. In this microfluidic device, we can model the fluid flow of a water droplet as it travels down a capillary tube and comes into contact with a drug concentration. This concept is illustrated in the figure below:

Analyzing the Concentration Profile in the Droplet

We can examine the total amount of the drug that has diffused into the droplet as a function of time. In the graph below, we analyze the quantity of the drug in the droplet when the drop is traveling at a speed of 0.1 mm/s. As can be seen in the graph, the drug concentration increases with an s-shaped profile. The steady increase between 3 and 6 seconds corresponds to the time where the droplet’s surface is in contact with the membrane. 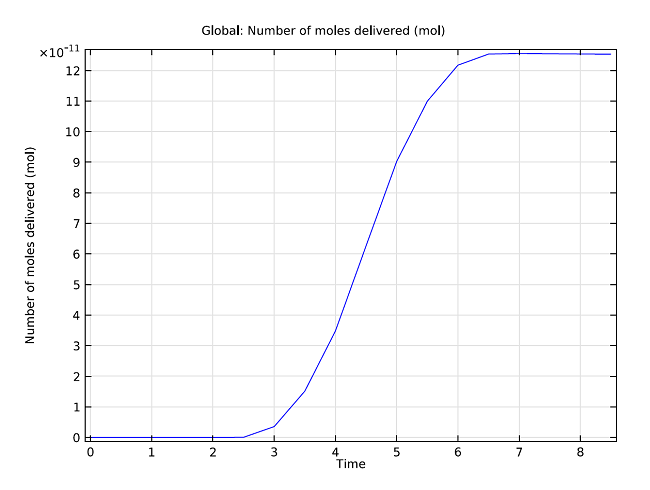 Additionally, we can measure the total number of moles delivered into the droplet against the droplet’s velocity. As can been seen in the graph below, the number of moles delivered into the droplet is approximately inversely proportional to the velocity of the droplet. Therefore, we can vary the amount of drug that is allowed to diffuse into the droplet by altering the time it takes for the drug to pass entirely through the membrane. With simulation, we are able to precisely and accurately anticipate the exact velocity needed in order to achieve a certain drug dosage. This system is accurate down to the picomole, and using simulation we can find the optimal velocity and time in order to administer a desired drug concentration. 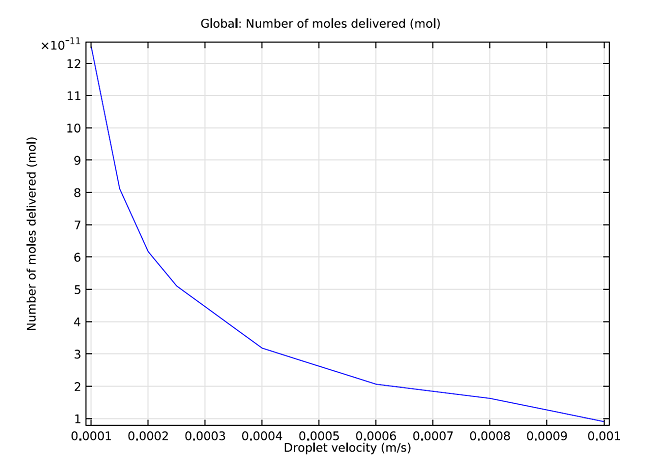