It’s easy to navigate from place to place thanks to GPS, but what about once you actually get there — what about navigating indoors? From venues of leisure to buildings in flames, there are many situations where indoor location tracking is useful. GPS technology does not work inside buildings, but there are now other methods under development that will make indoor navigation possible as well.

Given the relatively large margin of error associated with GPS (about 10 meters) and the fact that its signals are weak and get reflected off the very building you’re in (a phenomenon referred to as multipath interference), when trying to navigate indoors we cannot rely on the same technology as we would outside.

According to a November article from IEEE Spectrum, the most popular technique right now for indoor navigation is to use a combination of the end-user’s smartphone and WiFi access points to determine the location. Smartphones contain radio receivers that can pick up WiFi and cell phone network signals, something several navigation companies are working to leverage. By way of software installed in the end-user’s phone, the strengths of these signals are then analyzed and compared with the particular company’s online database, and certain algorithms are run to calculate the user’s location. The maps that visualize the location and convey directions are based on floor plans uploaded by the owner of the venue — be it a shopping mall, airport, or museum — or the location company they employ. Experiments with crowdsourced floor plans have also been conducted. 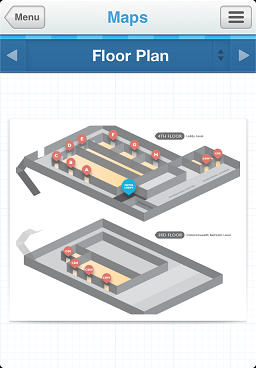 This method solves the indoor GPS issue and, according to a study cited in the aforementioned IEEE Spectrum article, the location can be calculated with an accuracy of 1.5 meters. So, WiFi navigation significantly brings down the margin of error, likely enough to bring shoppers to the correct store at the mall, or the right gate at the airport. But what if you need to be even more precise, or what if there are no WiFi hotspots?

In addition to enhancing the everyday lives of travelers and shoppers by making it easier to find their way, indoor navigation tools have a more critical potential application: helping firefighters locate victims inside burning buildings and then get back to safety. Of course, in this scenario, it is crucial that the navigation technology is incredibly precise and it would be impossible to rely on WiFi access points (they may have been destroyed by the fire or there may not have been any to begin with).

After the tragedy on 9/11, the U.S. Department of Homeland Security has been working on new navigation technology specifically for firefighters. This turned out to be no simple task, and results from commercial vendors ranged from too expensive to deploy to too bulky or imprecise. Eventually, Homeland Security decided to develop its own system, combining three devices to enable incident commanders to keep tabs on firefighters’ locations and vitals.

The first device is called Geospatial Location Accountability and Navigation System for Emergency Responders (GLANSER). Made up of a lightweight battery, navigation technology, and a microwave radio, GLANSER sends signals at a 900 MHz frequency to a USB-powered base station connected to a laptop computer. Thereby, the incident commander can follow each member of the crew — every step of the way. Staying updated on crew members’ vitals is made possible via a second device, called Physiological Health Assessment System for Emergency Responders (PHASER). If one firefighter needs assistance, PHASER will alert the commander, and another firefighter can locate him or her with the help of GLANSER. The one limitation here is the microwave frequency; it can easily be blocked by walls or other such media.

The third device is designed to combat this issue. The Wireless Intelligent Sensor Platform for Emergency Responders (WISPER) is a self-powered router that is both waterproof and can withstand temperatures as high as 260°C, or 500°F. The device includes a two-way digital radio, antenna, and a 3-volt lithium cell in packaging that is roughly 2.5 centimeters square in size and 1.3 centimeters thick. Based on the idea of dropping a breadcrumb trail, each firefighter is equipped with five WISPER routers in a waterproof canister, and when they step out of GLANSER’s range, the base station requests a router to be dropped from the canister. The routers then form a network that can be used to help locate the fireman. What if a router is destroyed or blocked? The network is automatically reconfigured among the working routers.

For non-emergency situations, advancements are being made for dealing with the indoor GPS issue in different ways. For instance, one company has developed a device that operates at a lower frequency than WiFi, around 1 megahertz, and operates in the near field of the transmitter. In this region, the transmitter’s electric and magnetic fields rise and fall at different phases. By setting up stationary receivers containing antennas that measure electric and magnetic fields and utilizing the distance-dependent phase difference, the location of a transmitter tag’s location can be calculated in relation to the stationary receivers. This method is supposedly accurate to about 40 centimeters inside a previously mapped out building. One of its drawbacks, however, is the short battery-life, a direct result of the large amount of power the tags consume. According to the IEEE Spectrum article, the short battery-life in combination with its large size makes this system less promising for a mass market roll-out.

In 2012, Fujitsu and NICT developed a navigation support system for the blind, using impulse radio ultrawideband (IR-UWB) technology. IR-UWB is a low-power, high-precision method thanks to the broad radio frequency range at which it operates and the nanoseconds-short pulses it emits. The system works by placing base stations throughout the building in question, a mobile station and a smartphone with a mapping application installed for the end-user, mobile stations at destinations, and a computer that controls everything (a control PC). The base stations initially map out the distance between them and all of the mobile stations, then the control PC computes the positioning data based on the varying measurements in real time. Finally, the position data is sent to the end-user’s mobile station as well as to their smartphone via Bluetooth, and audio instructions are given on where to go.

While there is already a lot of research and development underway for designing reliable indoor navigation technology, there seems to be quite a bit of room for improvement. The main challenge appears to be figuring out how to achieve location accuracy, portability, and battery longevity all-in-one — and at a low price. Have you seen any other new indoor localization technology advancements that we haven’t mentioned here?