To accurately compute lift and drag forces and optimize any airfoil following the NACA naming convention, COMSOL Multiphysics version 5.2 includes a new example, the NACA Airfoil Optimization app. In this blog post, we discuss how the app can be used for production applications and how you can benefit from using the Application Builder to enhance your own models and apps.

Lifting off the Ground and into the Skies

On a windy December morning in 1903, the Wright brothers prepared to make an attempt at flight in Kitty Hawk, North Carolina. Orville Wright took control of the plane and, making history, flew for 12 seconds across a distance of 120 feet. This groundbreaking moment marked the world’s first successful powered flight. 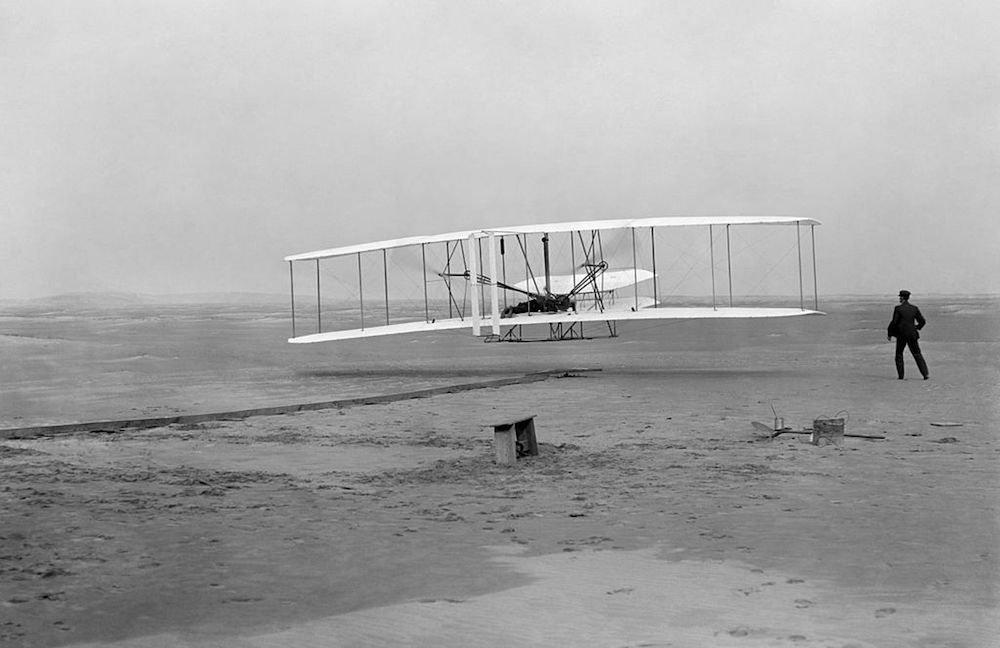 The Wright brothers were aviation pioneers, flying the first powered airplane in 1903.

Since that time, we have continued to take to the air, with airplanes growing in size and strength. While modern airplanes may fly much farther than the Wright brothers’ plane, they still obey the same laws of physics. A force known as lift holds airplanes aloft by opposing the weight of the airplane, thus enabling these machines to soar high above the ground.

By being able to easily compute lift and drag forces on an NACA airfoil with a customized simulation app, we can optimize these designs for aeronautical applications. Let’s get started…

The Capabilities of the NACA Airfoil Optimization App

The NACA Airfoil Optimization app allows for the computation of the lift and drag forces on a fully parameterized NACA airfoil. The four-digit NACA airfoil is an airfoil shape developed by the National Advisory Committee for Aeronautics (NACA), the precursor to the National Aeronautics and Space Administration (NASA). 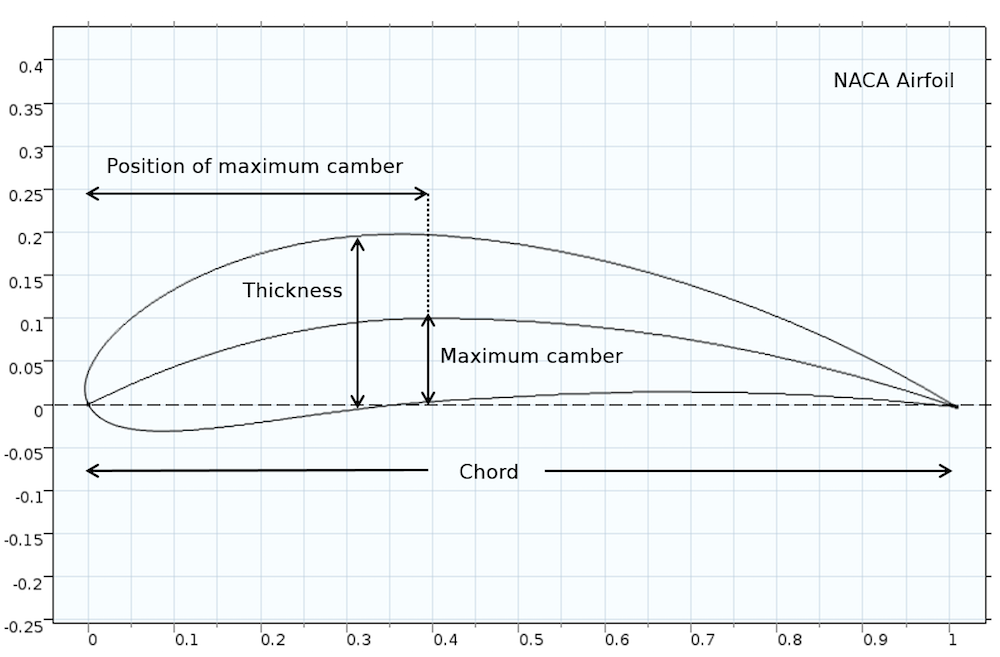 The basic geometry of an NACA airfoil.

The naming convention for the airfoil is as follows:

The NACA 2412, for instance, is an airfoil with a maximum camber of 2%, located at 40% of the leading edge. Its maximum thickness is 12% of the chord. The NACA 2412 is the default airfoil in this app.

The airfoil geometry is fully parametric and the app incorporates the Optimization interface to find the wing geometry parameters that maximize the lift-to-drag ratio. 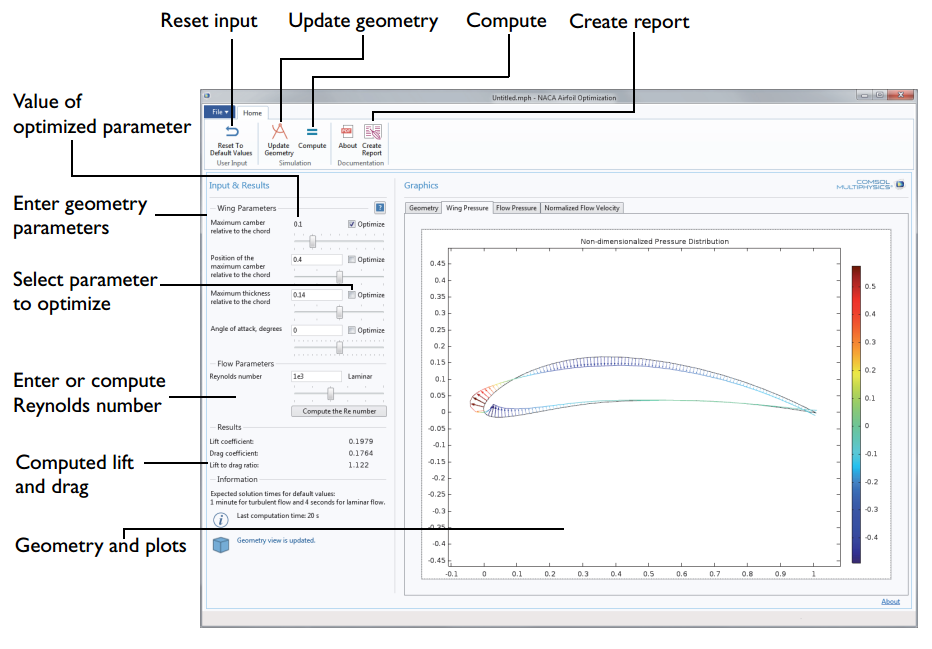 You can choose to enter the airfoil parameters and Reynolds number directly, or let the app’s optimization solver find the right geometry parameters to maximize the lift-to-drag ratio. The app computes and displays the flow velocity and pressure, the lift and drag coefficients, as well as the optimized geometry and its parameters.

Use the Application Builder to Enhance Your NACA Airfoil Designs

COMSOL Multiphysics has a user-friendly interface, but building an airfoil model can still be a complex task. As the modeling engineer, you have to build the geometry and select the right fluid flow interface based on the flow regime. If the flow is turbulent, you also need to select the right turbulence model. This process requires both time and simulation expertise.

With the NACA Airfoil Optimization app, building the geometry, choosing the correct fluid flow interface, and postprocessing are already taken care of when you design the app. The resulting app can therefore be deployed to your colleagues and customers for production uses.

Pressure distribution on the airfoil, plotted using the Method Editor and COMSOL API.

Open the NACA Airfoil Optimization example app, explore its functionality, and use the same methodology to build your own apps. This particular example teaches you how to create an app that can optimize the airfoil geometry for a given objective, automatically switch physics interfaces and meshes based on user input, and create advanced plots for easy postprocessing.

There are many more ways that you can benefit from the Application Builder and COMSOL Server™. You could use this app for teaching purposes and use the pressure distribution plot to explain to your students how the pressure difference on both sides of the airfoil creates an upward lift. The students could then test different airfoil parameters to try to improve the wing design and get some physical understanding of the lift without having any CFD background. Additional ways to use the Application Builder are detailed in this previous blog post.