Predicting the Stability of Rotor Systems with the COMSOL® Software 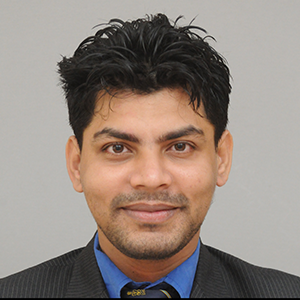 While working with rotating components, stability analysis is critical, as instability can lead to catastrophic failure. Rotating systems can lead to unstable responses due to asymmetrical inertia of the disk, asymmetrical stiffness of the shaft, or cross-coupling effects due to bearings. From the designer’s point of view, it’s important to ensure that the potentially unstable modes lie outside the operating range of the machine. Let’s explore how to predict the instability in rotor systems using the COMSOL Multiphysics® software.

Static stability is based on the initial response of a system when disturbed from equilibrium and can be further divided into the following conditions: 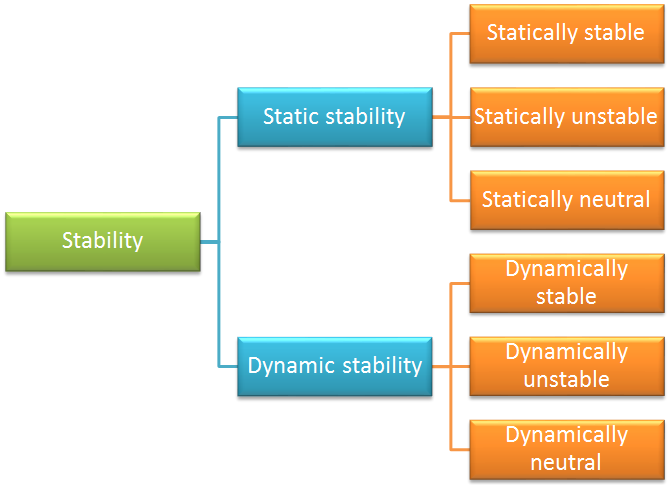 Dynamic stability is based on the time history of motion after a system is disturbed from its equilibrium position and can be further divided into the following conditions:

These motions are also broadly classified into two categories: oscillatory and nonoscillatory.

As we are now familiar with the basic terminology, let’s get into the mathematical definition of stability and the conditions for which a system becomes unstable.

Defining the Conditions for Stability

The general dynamics equation of motion in inertia is as follows:

The solution of the dynamic equation can be classified as one of four categories:

The solution for the governing equation is also bounded and well behaved if all of the coefficients are positive. However, there are circumstances in which the coefficients become negative and the solution becomes unbounded. To understand this issue, let’s take a look at the response of a spring-mass-damper system in various scenarios, as shown in the figure below. 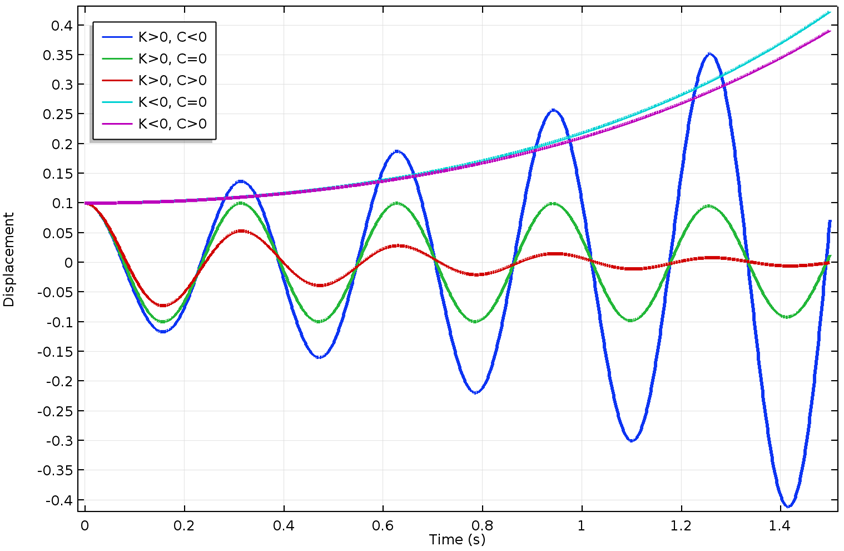 Responses for different values of stiffness and damping coefficients.

Equations of Motion for Rotordynamics Problems

Rotordynamics problems are different from conventional vibration analyses. Additional terms appear because of the additional acceleration force terms present in the equation of motion, depending on the selected physics.

Now, let’s see how these terms affect the stiffness and damping matrix.

The beam rotor is modeled in a stationary frame. The equation of motion for the rotating frame is:

In a beam rotor, the gyroscopic terms contribute to the antisymmetric part of the damping matrix and internal damping appears as an antisymmetric term in the stiffness matrix. 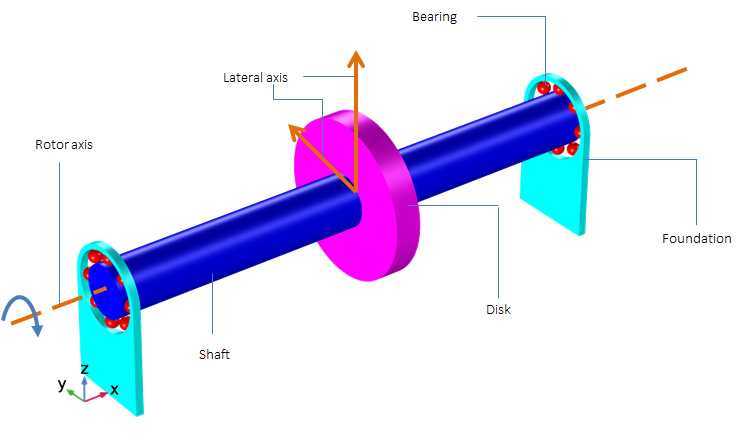 For rotordynamics problems, the lateral equations of motion are coupled; therefore, they are more complex than the equations for axial and torsional vibrations. In this section, we will discuss the effect of direct stiffness and cross-coupled stiffness on the lateral motion of rotors. Let’s consider a symmetric rotor with symmetric bearing on both sides. The bearing contains both direct and cross-coupled terms. 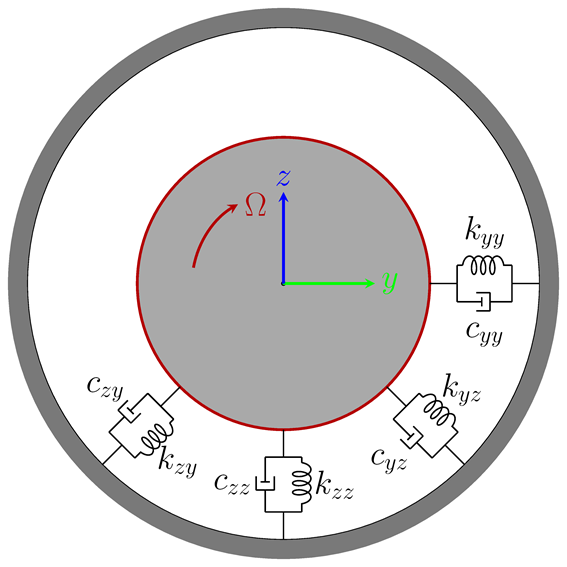 Schematic of a bearing with direct and cross-coupled terms.

If we write the forces in the individual directions, this can be written in matrix form as:

So, the forces in the y and z directions can be written as:

Let’s discuss the individual effect of each term on the lateral motion of the rotor system. Depending on the input, there are two types of whirl modes: forward and backward. In the case of the forward whirl, the orbital motion and the spin direction of the rotor are in same direction, whereas for the backward whirl they are opposite. 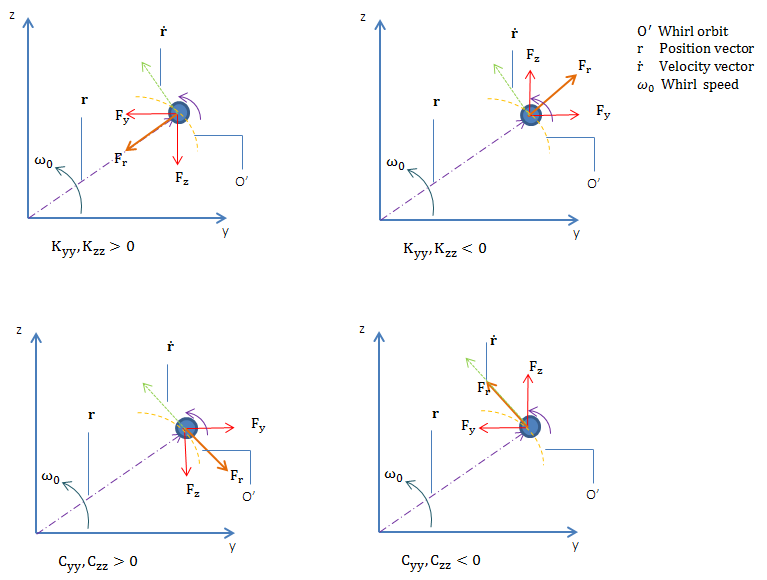 If \textbf K_{yz}, \textbf K_{zy} have opposite signs, then they produce a force normal to the deflection vector. The direction depends on the sign of the coefficient. 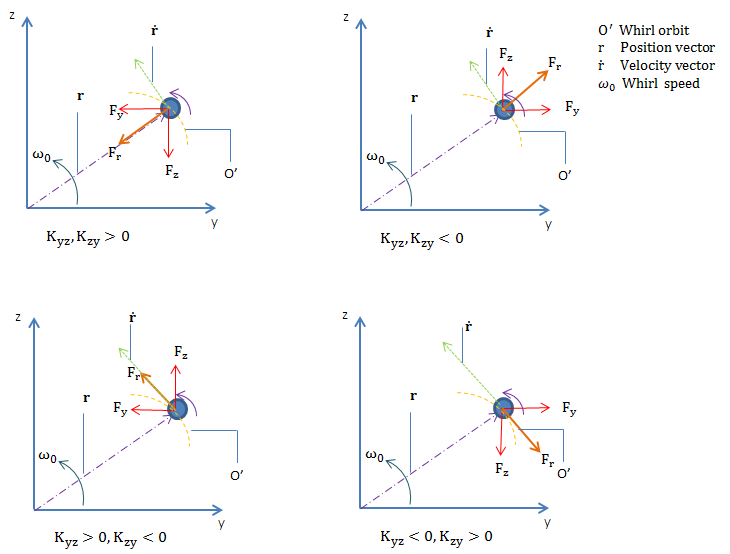 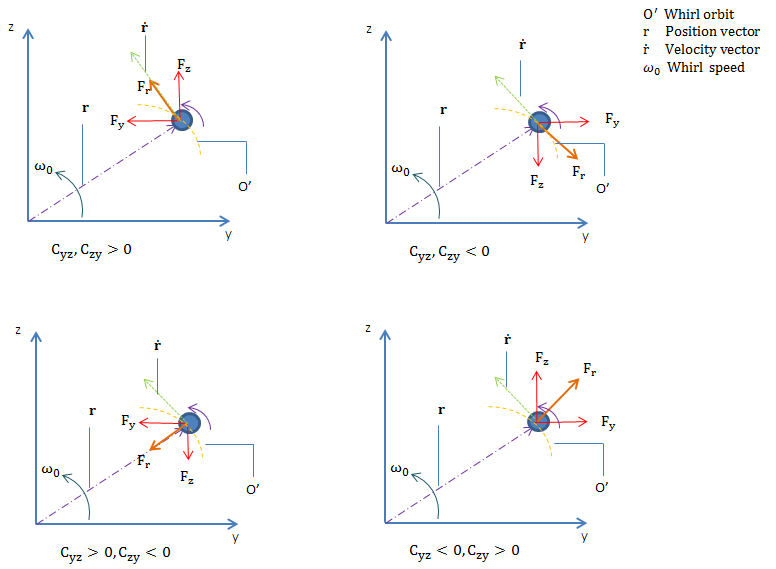 In short, the term that generates force in the radial direction (direct stiffness and cross-coupled damping) does not cause instability in the system, while the terms that cause a force tangential to the whirl orbit can cause instability in the system. The effect of the coefficient also varies depending on the whirl modes. For example, if \textbf K_{yz}(+ve), \textbf K_{zy}(-ve), it generates a force tangential to the whirl orbit, which can be destabilizing for the forward whirl and stabilizing for the backward whirl. Let’s summarize the effect based upon the whirl mode:

As a designer, it is nearly impossible to create a perfect rotor, as there is always some asymmetry present in the model. The asymmetry can be due to mass distribution or in stiffness due to shape. In addition, a rotor can be subjected to cross-coupling forces, internal friction, rotor rubbing, and steam whirl. The presence of these conditions affects the stability of the rotor system. Let’s investigate a few of these cases…

Instability Analysis Due to Bearings

If the shaft is aligned along the x-axis, then as per common practice, the cross-coupled forces are written in matrix form, as follows:

Typically, in hydrodynamic bearings, cross-coupled forces play the part of a negative damping in a rotor. When approaching a critical speed, these forces can cause uncontrolled vibration and even failure of the bearing.

A model in the Application Library discusses stability due to cross-coupling forces. The model consists of a turbocharger rotor supported by two bearings: one near the compressor and another near the turbine, making both the compressor and turbine overhung on the shaft. 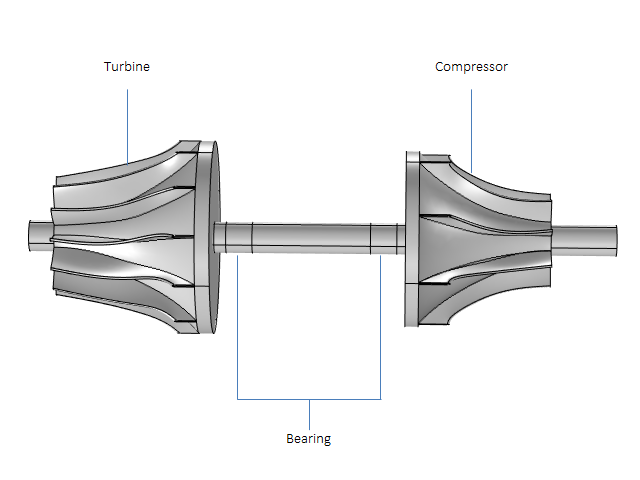 A turbocharger with bearings. 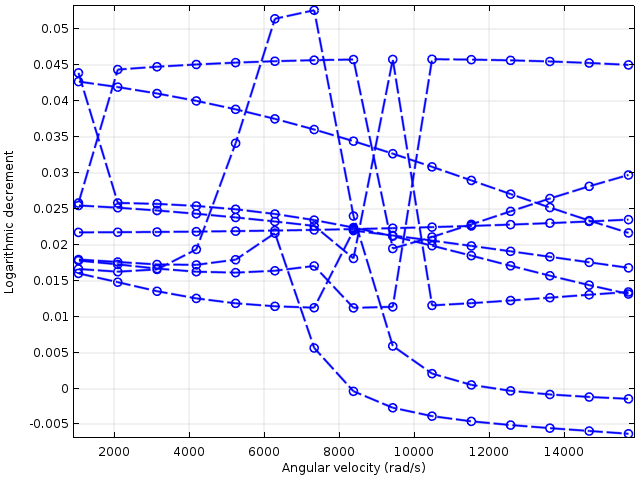 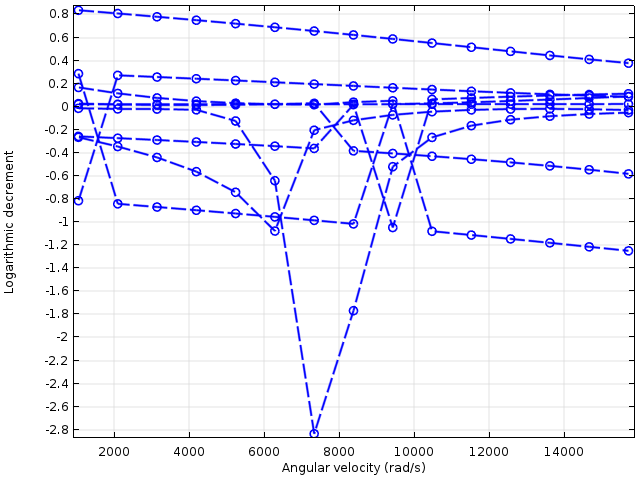 Logarithmic decrement without (left) and with (right) a cross-coupled term.

The results indicate that the presence of cross-coupled stiffness makes the vibrational modes unstable, hence it is dangerous to operate the turbocharger rotor at these speeds.

Instability Due to Rotational Damping

It sounds strange that the element of mechanical dissipation can cause instability, but in the case of a rotating component, it is true. As the rotational damping is attached to the body, it is in the rotating frame. After coordinate transformation in a stationary frame, it is not solely dependent on the velocity anymore. The transformation leads to a dissipative term and a circulatory term, which depend on rotor speed and displacement. The circulatory term is one, which is responsible for the instability.

where \omega is rotor spin speed.

Let’s consider a Laval-Jeffcott rotor that consists of a massless shaft and single disk supported by two identical bearings on ends with symmetric damping and stiffness. Now, if the rotational damping effect is also included in the system, the circulatory term appears in the governing equation and causes instability.

Schematic of a Laval-Jeffcott rotor with internal damping.

To further investigate the effect, let’s draw a force diagram for the system. From the force diagram, it is clear that the circularity term produces force in the direction of motion for forward whirl. This means that the circulatory term is adding energy to the system, while the dissipative term due to external damping continuously removes the energy from the system. 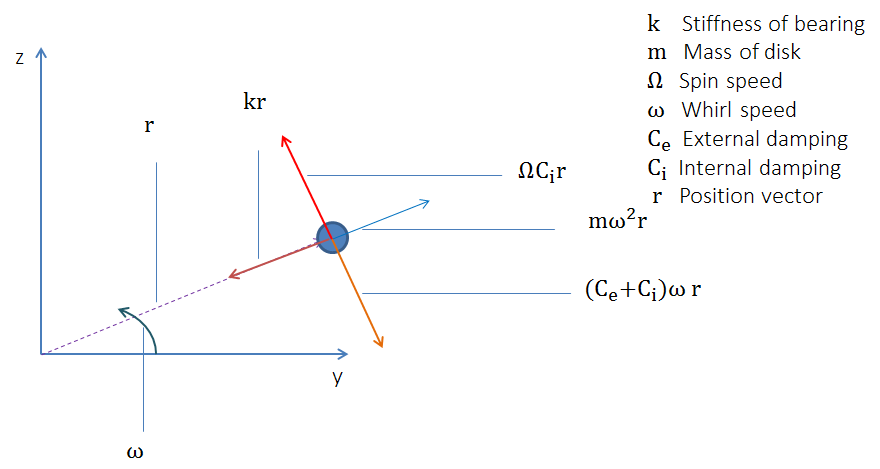 Force diagram for a Laval-Jeffcott rotor with internal damping.

From the force diagram, we can say that the condition \Omega = \omega \frac{C_e+C_i}{C_i} triggers instability in cases of asynchronous whirl conditions. Asynchronous whirl occurs when the spin speed and whirl frequency are not the same. The internal damping in rotors is produced by either the material’s hysteretic damping or by the Coulomb damping due to rubbing at the interface of shrink-fitted parts. 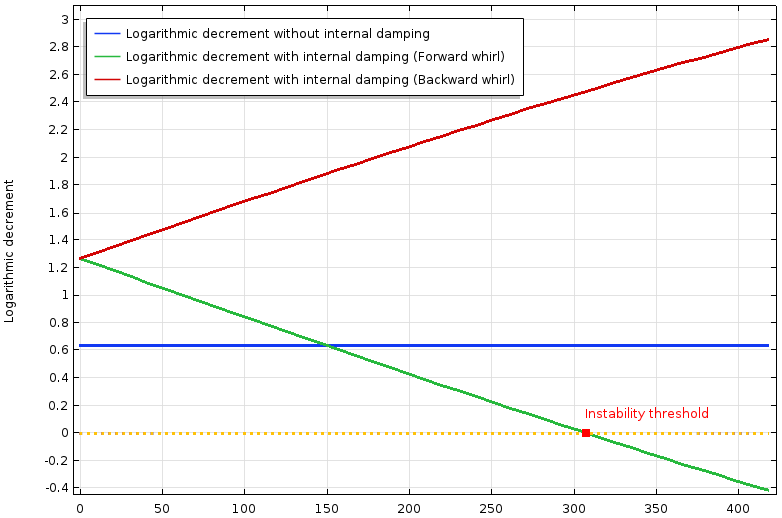 If we perform a frequency-domain analysis, the results are identical to the case without damping and the whirl is circular. This means that there is only forward whirl in the model. 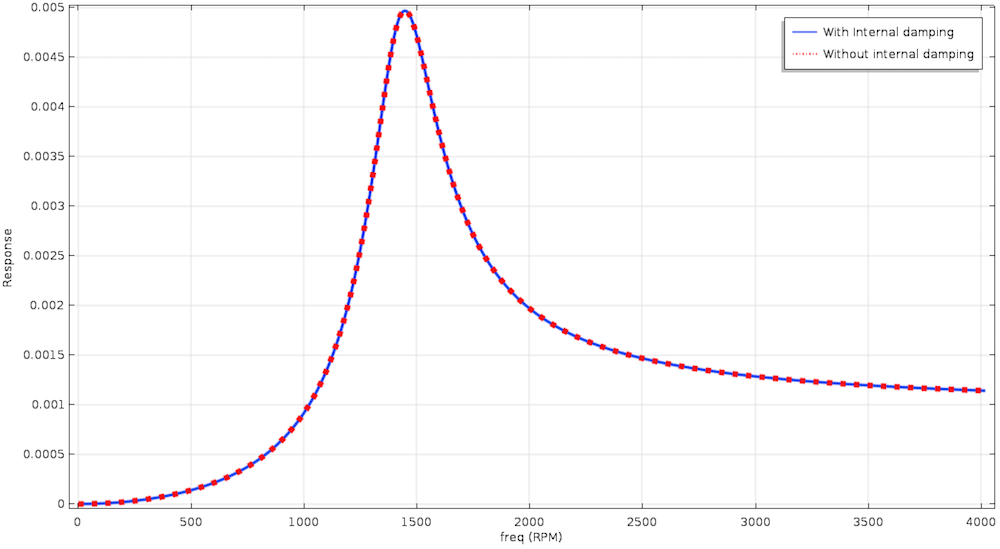 Frequency response of a Laval-Jeffcott rotor with and without internal damping.

A cross-coupling term due to rotational damping only affects the damping characteristics without changing the response of the system. Now, if we look at the Campbell diagram, the natural frequency is no longer a constant value, or else it increases with the speed if internal damping is present. The effect increases the damped critical speed in cases of internal damping or if we want to find the instability threshold using the Campbell diagram. Then, we can draw a line \omega=\Omega(\frac{C_i}{C_i+C_e})\ and the intersection of the line with the natural frequency gives the threshold value. 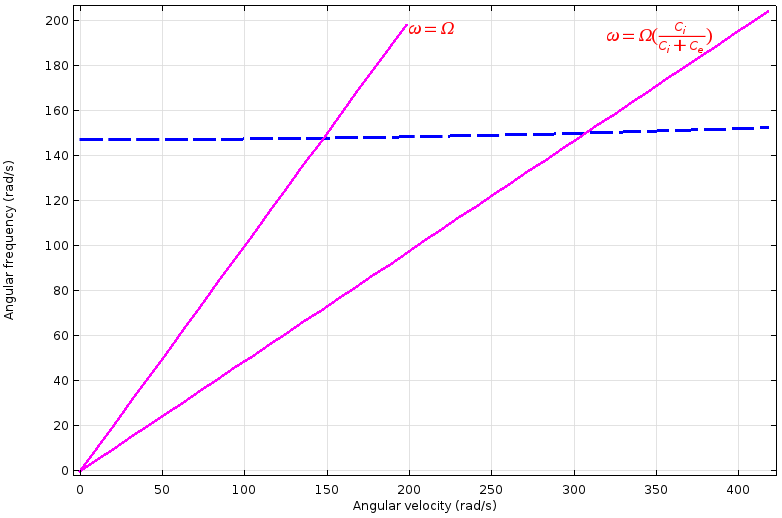 Campbell diagram of a Laval-Jeffcott rotor with internal damping for initial mode.

Instability Due to Steam Whirl

Steam whirl arises in axial flow machines, like gas turbines, when the radial displacement of the shaft takes place as a result of leakage along the circumference. This sets up a resultant force perpendicular to the displacement. The excited force gives instability for some operating conditions and stability for others. The steam whirl force adds to the stiffness term in a skew-symmetric way, like internal damping, but there is no dependency on the spin speed.

To understand the effect more easily, let’s discuss the force diagram for a Laval-Jeffcott rotor with external damping and stiffness subjected to steam whirl. 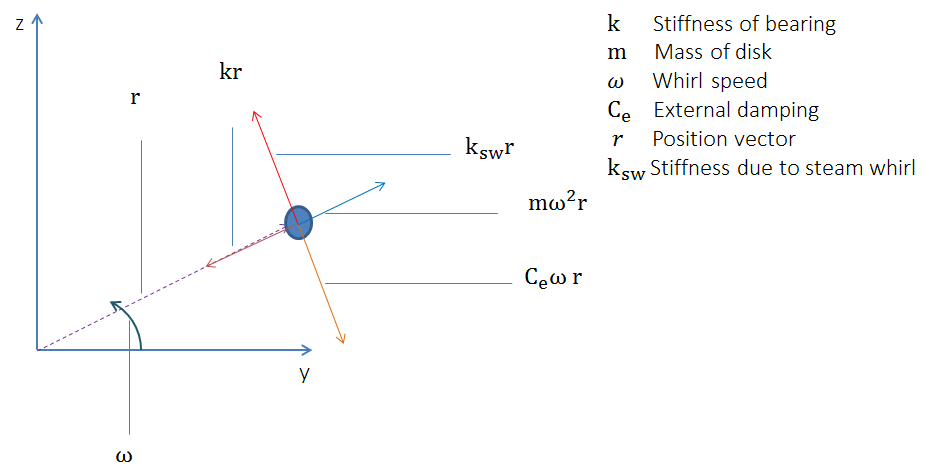 Force diagram for a Laval-Jeffcott rotor with steam whirl.

Let’s consider a Laval-Jeffcott rotor such that the system is initially unstable due to the skew-symmetric term. If we introduce external damping into the system, the logarithmic decrement moves toward zero and finally becomes positive. By increasing the value of the external damping, the frequency value of the system’s instability threshold can be increased. 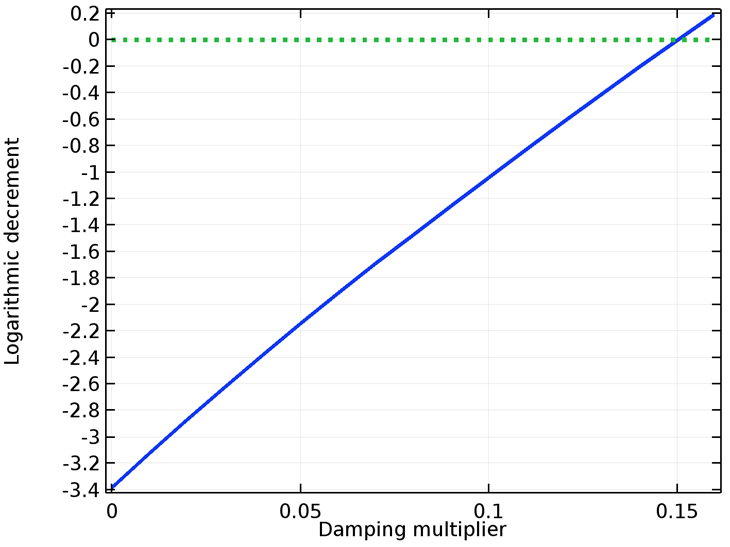 Logarithmic decrement of a Laval-Jeffcott rotor with fixed ends and steam whirl.

In this blog post, we discuss the types of stability, influence of the coefficients of damping and stiffness matrices over the response of the system, governing equations for solid rotor and beam rotor physics, methods to predict the instability in a system using eigenfrequency analysis, and a few applications that induce instability in rotor systems.

Learn more about the specialized features for modeling rotating systems available in the Rotordynamics Module, an add-on to COMSOL Multiphysics and the Structural Mechanics Module, by clicking the button below.

Show Me the Rotordynamics Module