Doctors can more effectively treat skin cancer when skin tumors are detected early. While visual examinations are typically used to identify such tumors, noninvasive tools like dielectric probes offer another approach. With COMSOL Multiphysics, we analyze the functionality and safety of a dielectric probe used for skin cancer diagnosis.

Skin cancer affects numerous people around the world and is recognized as the most common form of cancer in the United States. Despite its prominence, this disease is highly treatable when skin tumors are detected early and removed. These tumors can be identified during monthly self-examinations and with the help of medical professionals. However, noninvasive skin tumor detection tools, such as dielectric probes, are emerging as an alternative.

To identify tumors, dielectric probes can utilize a millimeter wave with frequencies of either 35 GHz or 95 GHz. This millimeter wave has a sensitive reflective response to water content, which it uses as a means of detecting skin tumors. Such tumors possess a different scattering parameter or S-parameter than that of healthy skin, and the probes locate tumors by identifying these abnormal S-parameters.

Through simulation, we can evaluate the functionality of a conical dielectric probe and ensure its safety as an alternative for detecting skin tumors.

Fast and Efficient Simulation of a Dielectric Probe

In this example, we model our waveguide as a perfect electric conductor (PEC) and assume that its conductivity is high enough to negate any loss. The waveguide terminates at a circular port on one end and is connected to the dielectric rod on the other end. The dielectric rod is designed for impedance matching between the waveguide and the air domain. It is symmetrically tapered and supported on the rim of the waveguide by a ring structure. The tip of the rod touches the skin phantom, and the whole device uses a low-power 35 GHz Ka-band millimeter wave when operating. 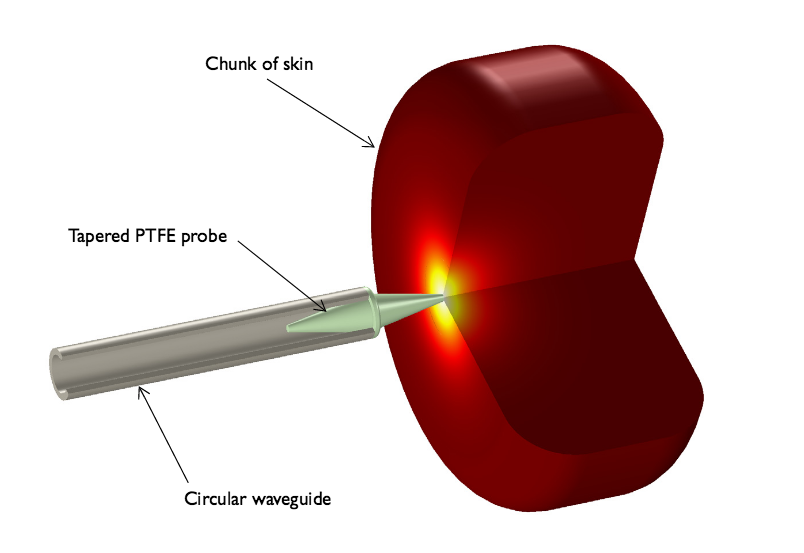 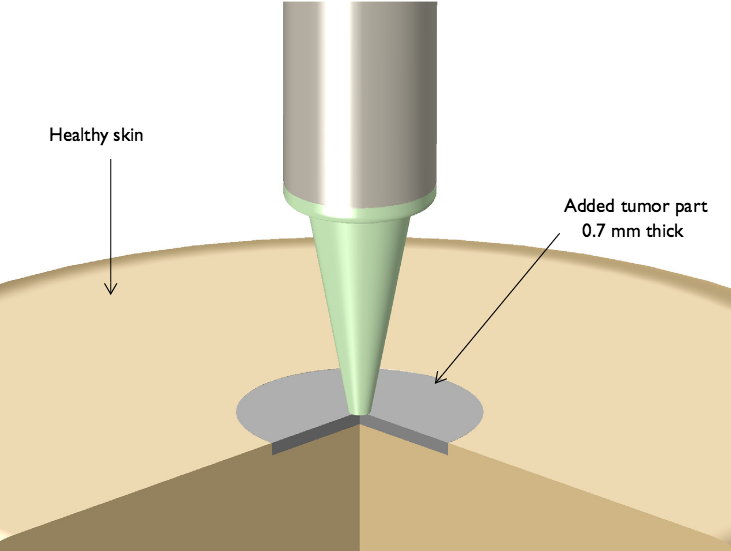 Ensuring the Functionality and Safety of Our Probe Design

To analyze the validity of the probe design, we first observe the electromagnetic properties of the circular waveguide and dielectric probe without the skin phantom. From the simulation results, we can conclude that the probe is functional. 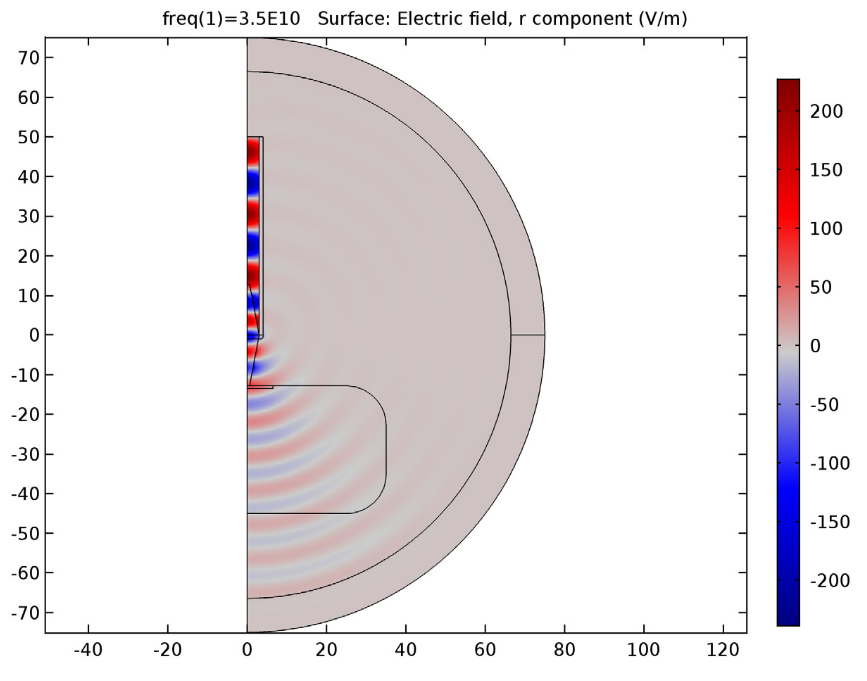 The dielectric rod’s wave propagation without the skin phantom.

Next, we increase the complexity of our model with two additions: a healthy skin phantom and a skin phantom containing a tumor. This enables us to calculate and compare the S-parameters for each of these cases. Our findings show that the S11 value of the healthy phantom is -9.84 dB, while the phantom containing a tumor features an S-parameter value of -8.87 dB. These values indicate that more reflection occurs when the probe touches the skin phantom with a tumor. We can expect such a result, as tumors have a higher moisture content than healthy skin.

While we found the S-parameter approach to be functional, we also want to ensure that it is safe. To do so, we study the temperature distribution over the skin phantom surface in order to find the fraction of necrotic (damaged due to heat) tissue. 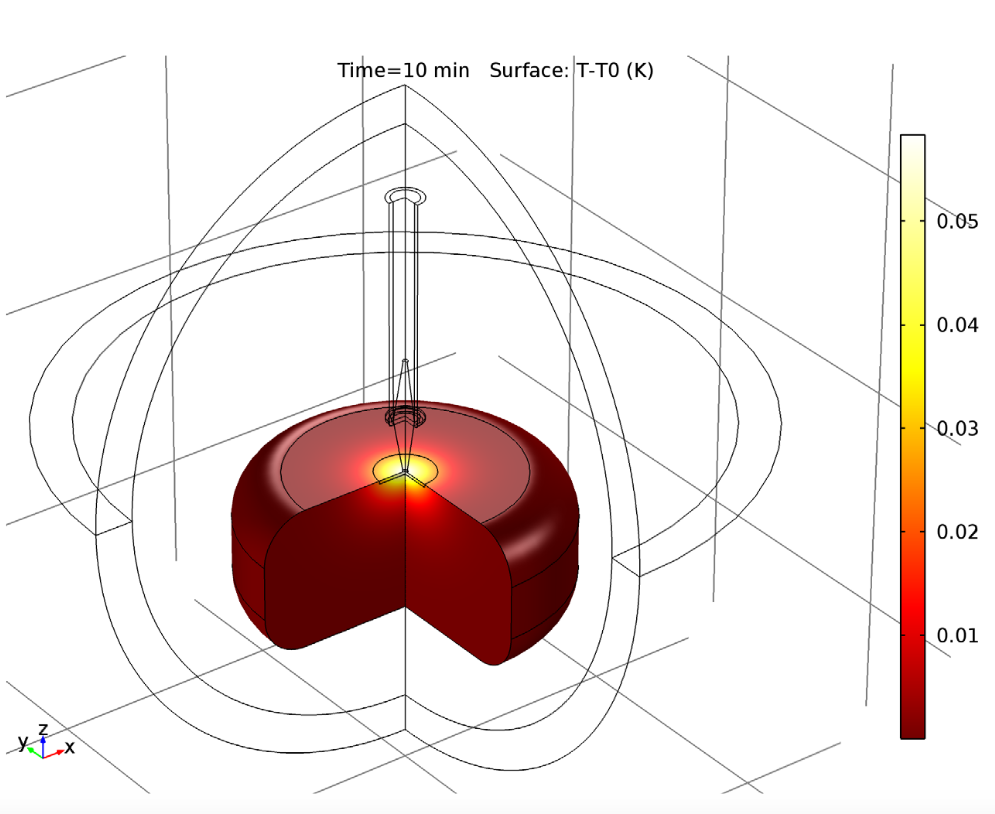 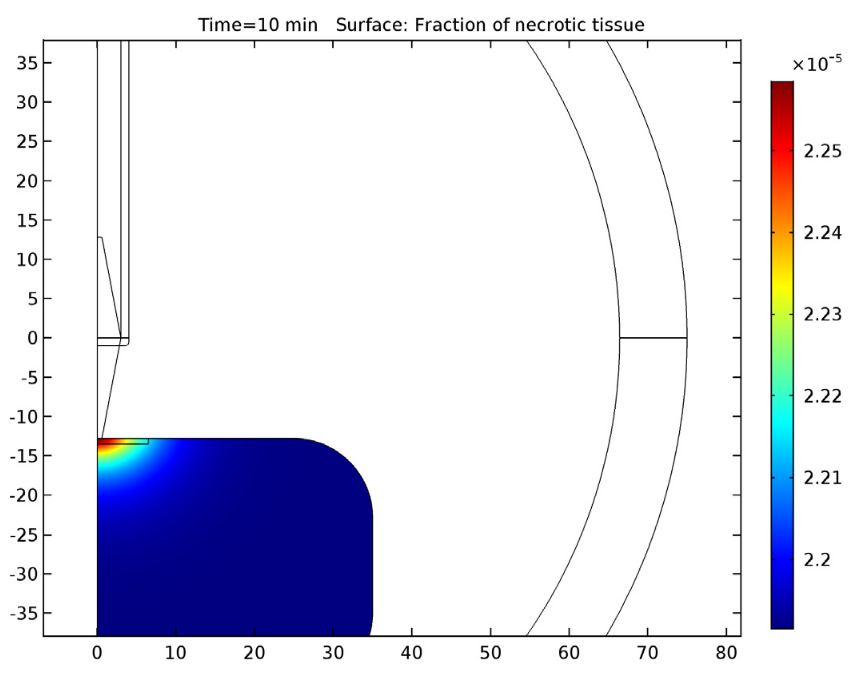 Left: Temperature variation on a skin phantom with a tumor. Right: Plot of the necrotic tissue.

Our analysis of a skin phantom with a tumor shows that, after ten minutes of low-powered millimeter wave exposure, the temperature change is within 0.06°C. Even at the relatively hotter spot, the temperature remains very close to the initial temperature of 34°C. With this information, we can assume that there are no harmful temperature differences. Furthermore, our results show that the fraction of necrotic tissue is negligibly small, indicating that the temperature rise induced by the probe has a negligible effect on the tissue.

How to Use Circular Ports in the RF Module