Lasers, focused beams of photons of a single wavelength, find use in a wide variety of applications today — from noninvasive surgeries and fiber optic communication to material processing and even DVD players. Let’s see how a research team from Lawrence Livermore National Laboratory (LLNL) used the power of multiphysics simulation to investigate laser-material interaction to avoid the damage of optics internal to high-power laser systems.

Researchers at the Lawrence Livermore National Laboratory (LLNL) work to understand the complex interactions of lasers with materials. LLNL is in charge of the National Ignition Facility (NIF), which houses the world’s largest and most energetic laser. This machine can amplify optical energy to astronomical proportions and is used by astrophysicists to better understand the universe and nuclear fusion.

However, the demanding operating conditions of this laser take a toll on the internal/inherent optics that focus, reflect, and guide the laser beams. Repeated use of the laser causes damage to these optics, leaving microscopic dents and chips, as shown below. This damage, if not corrected, could alter the laser’s optical properties and as a result, the functional abilities of the laser, specifically leading to unwarranted light modulation and scattering. At the same time, these optics are expensive and replacing them repeatedly is uneconomical for the project. 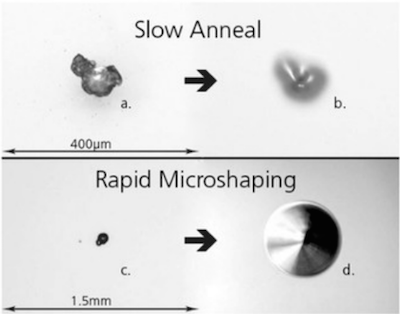 Small lasers can address the potential issue of laser-induced damage in the internal optics. A team of researchers in the Materials Science Division at LLNL, led by Manyalibo Matthews, focuses on innovative techniques for repairing these optics. With the help of simulation, they are exploring IR pulsed microshaping, thermal annealing, and laser chemical vapor deposition (L-CVD).

The first step in the simulation research was to understand the behavior of fused silica when exposed to a laser beam at varying temperatures. The team used the built-in capabilities of COMSOL Multiphysics to simultaneously simulate multiple physical phenomena, such as fluid flow, heat transfer, mass transport, structural mechanics, and chemical reactions.

The researchers observed that at high temperatures, the flow of glass causes ripples that interfere with the optical properties, as shown below. They used very short-duration IR laser pulses to take away these defects, leaving behind a smooth surface.

Using COMSOL Multiphysics, the team was able to understand energy coupling and heat flow for a wide range of parameters, such as the duration of laser pulse (i.e., microseconds compared to minutes), and their results were in line with experimental observations. These simulation results also helped the team understand the material and temperature behavior in the laser-ablated regions. This knowledge can be applied to many other fields that involve the polishing, annealing, and microshaping of silica surfaces, such as optical glass polishing, as well as for medical and tribological applications. 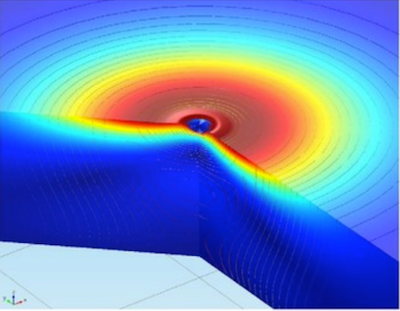 Simulation results showing the Marangoni flow of the laser-heated glass. The Marangoni effect occurs when laser heating leads to gradients in temperature-dependent surface tension, which cause the material to flow radially outward, forming what look like ripples or rimmed pits.

To study larger defects in the optical system, the researchers at LLNL explored the applications of L-CVD. This additive process uses a silica precursor gas coupled with a CO2 laser beam to deposit material on the damaged surface with nanoscale precision. The precursor gas flows through a nozzle onto the optic surface along with the laser beam. The beam then decomposes the gas and deposits solid SiO2 on the damaged optic surface. Although this technique is still in its early stages, it shows great promise. Using COMSOL Multiphysics to optimize beam intensity, position, and pulse duration along with flow and concentration of deposited material, the team has made considerable progress toward understanding the various factors that influence L-CVD and addressing future additive damage repairs.

Velocity and temperature fields for L-CVD, showing the velocity contours associated with the precursor flow (left) and the velocity streamlines of the vaporized silica (right).

Around 130,000 damage sites in the NIF laser have been repaired using IR microshaping, which was optimized in part using the researchers’ multiphysics simulation results. This has enabled the recycling of optics and a large cost reduction in the project. The team at LLNL also supports a lab-wide additive manufacturing initiative for 3D printing, which potentially has even more far-reaching applications than the repair of damaged optics.

Analyzing the Acoustics of a Head and Torso Simulator

How can I simulate that?

Hi,
I am still a beginner, and I would like to understand how to perform this simulation of a laser of 532nm or 1064nm wavelengths on different surfaces of silicon or silicon carbide.