It’s that time of year again for all the foodies out there; on January 29th the 2013 Bocuse d’Or will be in full swing with 24 chefs each representing their country, vying for the Gold Medal in the Olympic Games of the culinary world. In this biennial event, the chefs will have to combine classical and innovative cooking techniques to come out on top. At the last Bocuse d’Or in 2011, Gunnar Hvarnes propelled past the competition with the aid of COMSOL Multiphysics. He successfully combined the art of cooking with the innovative science of cooking, earning him the Bronze medal. 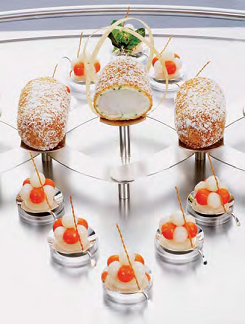 Cooking gets a Multiphysics Makeover

The Bocuse d’Or is a biennial world chef cooking championship, referred to as the culinary equivalent of the Olympic Games. The competition pits the world’s greatest young chefs against each other to create the most delicious, aesthetically pleasing dishes for 14 world-renowned judges. Twenty four chefs from different competing countries face off in a 5.5 hour time-frame in front of a live audience to be declared top chef. This extravagant, mouthwatering event may seem unrelated to computer modeling, but it was in fact an integral part for one team. Gunnar Hvarnes, the award-winning Norwegian chef, used food science and multiphysics simulation to give him a competitive advantage. In the Bocuse d’Or Europe, the entry competition to the Bocuse d’Or for Europeans, Hvarnes created a fried halibut fish roll for one of his main dishes. While practicing to cook the dish, he had trouble finding the right maximum temperature in the roll and the amount of time to cook it. Hvarnes enlisted the help of Nofima (a research group majority owned by the Ministry of Fisheries that performs research and development in aquaculture, fisheries, and the food industry) and Dagbjørn Skipnes, a researcher and COMSOL Multiphysics user. 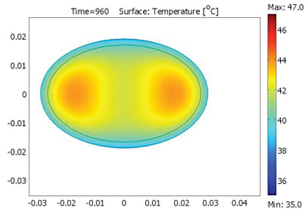 Leveraging the Science of Cooking to Take Home the Prize

Skipnes and Hvarnes worked together to create a 2D model of the oval shaped fish roll (shown above). That led them to discover hot spots at two points, rather than in the center where Hvarnes was originally measuring the temperature. Measuring the temperature in the center and basing his next steps on this false data had been leading Hvarnes astray. After modeling the roll in COMSOL, they were able to study how long the fish needed to remain in the frying oil, how long it would take to reach the desired temperature in the center, and how long to let it cool to allow equal distribution of the heat throughout the roll. With this new information and Chef Hvarnes’ culinary skills, he came in second place in the Bocuse d’Or Europe earning a 9,000 Euro prize, and placed 3rd in the global competition.