Upgrading the Nuts and Bolts of the Electrical Grid

The electrical grid describes the network created for producing electricity, transmitting it and delivering it to the consumers. A “smart grid” is an electrical grid that gathers information on the suppliers and consumers automatically to improve efficiency and sustainability in the system. As the automated technology improves, the hardware that physically connects the electrical grid together must improve as well. This hardware, the “nuts and bolts” of the grid, is comprised of transformers, cable joints, terminations, bushings, and fault current limiters (FCLs). COMSOL Multiphysics has been used for two different applications in this industry, described below.

Bushings let conductors pass through a grounded wall and prevent flashover or breakdown when a high-voltage connector is penetrating a metal wall. Cable joints connect two power transmission cables. Goran Eriksson, a scientist with ABB AB Corporate Research Power Technologies in Sweden, has been researching the area of bushings and cable joints. In particular, he has been looking at the problem caused by the used of increased voltages. Increasing voltages reduces the line current and resistive loss in the cables, but also requires larger or, preferably, better equipment.

Eriksson used COMSOL Multiphysics to optimize the bushing design, due to the Multiphysics nature of the model. In designing the bushings, problems arose that were both electrical and thermal in nature. In addition, the thermal problem is coupled to equations for a fluid flow transporting and removing the heat generated inside the device. The results obtained using COMSOL dramatically improved the bushings, significantly reducing their sizes. 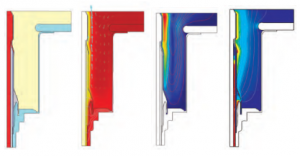 From left to right: the axisymmetric geometry, the temperature distribution in the device, the velocity amplitude, and the electric field amplitude.

While engineers like Goran Eriksson are improving traditional parts of the grid, others are focusing on the emerging technologies, like superconducting fault current limiters (FCL’s). FCL’s protect electrical equipment and the whole infrastructure from fault currents caused by short circuits. One possible solution is the use of superconducting materials. The advantage of superconducting FCL’s to regular fuses is their ability to reset themselves, whereas a fuse must be replaced when blown.

With emerging technologies, there are always problems that arise. A team of researchers from the Center for Advanced Power Systems at Florida State University (FSU-CAPS) and Bruker Energy & Supercon Technologies (BEST) is trying to overcome the major design challenges facing FCL’s. COMSOL allowed the team to couple electric circuits with electromagnetic FEA, to understand and implement this type of coupling. The results of the modeling were successful enough to publish at the COMSOL Conference 2011.

For further reading on both these stories, visit the Multiphysics Simulation: An IEEE Spectrum Supplement.