What Happens If I Use 2 Different Unit Systems in 1 Simulation? 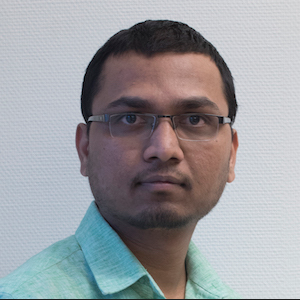 What Are Units and Unit Systems?

A unit is a specific, established quantity or property of which the magnitude of that quantity can be expressed as multiples of that unit of measurement. Units of different quantities form a unit system. Over time, many unit systems have lost their significance, leaving two dominant systems: metric and English.

The International System of Units (SI) is derived from the metric system and is now the global standard. The United States, Myanmar, and Liberia are the only countries that have not fully converted to the SI. Although the majority of countries shifted to SI units for professional use, many traditional units are still in use at the local level.

Why is the distinction between unit systems important? Let’s take a look at two historical disasters to find out.

In the 17th century, King Gustav II Adolf of Sweden aimed to make his country one of the most admirable military powers in Europe. He contracted a Dutch ship building company to build four powerful ships. One of them was the Vasa Ship, which was slated to be the most powerful warship in the Baltic Sea for that era. In 1628, Vasa set off on its first journey — and sank about 1700 meters from the shipyard, just 1300 meters into its voyage. 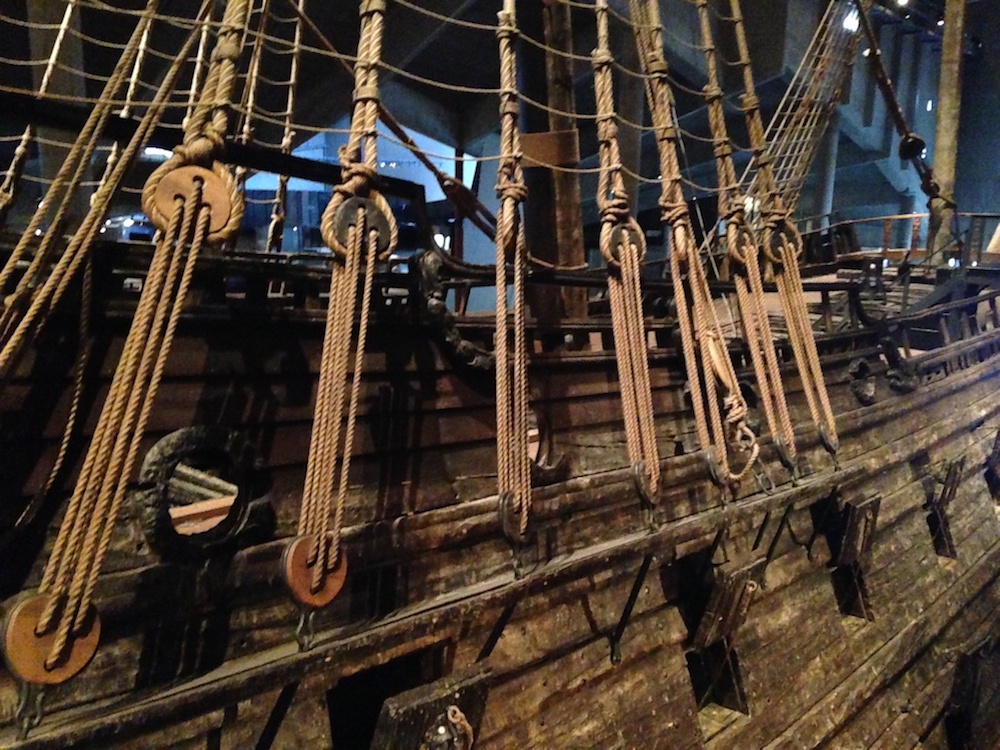 The Vasa Ship is on display at the Vasa Museum in Stockholm, Sweden.

According to research on the Vasa Ship from as recently as 2012, a main cause of the disaster was an asymmetric ship structure: The ship was heavier on the port side than the starboard side. Investigators found that four rulers used by Vasa workmen had different standards of measurement. Two rulers used the Swedish unit for feet, with 1 foot equal to 12 inches. The other two rulers used the Dutch unit for feet, in which 1 foot equals 11 inches. By failing to convert the units into a standard unit system, the ship builders caused asymmetry in the ship structure, which was one of the main reasons it sank.

NASA investigated what went wrong and detailed eight contributing factors in the failure report. They underlined the main cause as the failed translation of Imperial units to SI units. During the orbital insertion maneuver, the intended height of the orbiter from the Mars surface was 110 kilometers. However, it was placed on a trajectory that would have placed the orbiter at a height of 57 kilometers from the Mars surface, which caused the orbiter to come in contact with Mars’ atmosphere and disintegrate.

To demonstrate the capabilities of COMSOL Multiphysics for unit systems, we use a model from the Application Library: the Tapered Cantilever with Two Load Cases.

The choice of unit system does not constrain you to use units from the selected system. Instead, the chosen unit system is applied by default to physical quantities where no unit is specifically written. For example, by selecting SI for Unit System, you can still apply pressure in MPa by writing [MPa] after a value. Or, prescribe displacement in inches by writing [in] after a value. This flexibility enables you to work with different unit systems at the same time.

Take a look at the Boundary Load feature in the tutorial model. The left image below shows the boundary load in the x direction as 10[MN/m] in SI units. However, the same load can be provided in British engineering units; i.e., Pound-force as 57101.47 [lbf/in]. By solving the model with an equivalent boundary load in British engineering units, you get exactly same result as the SI. 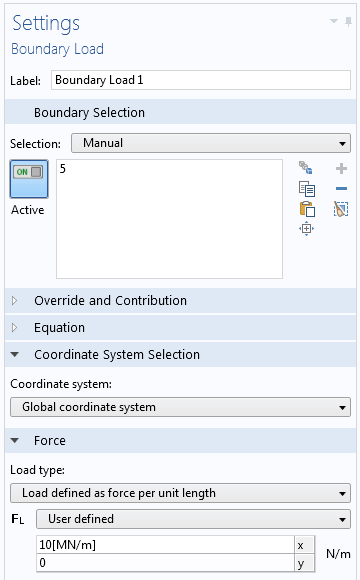 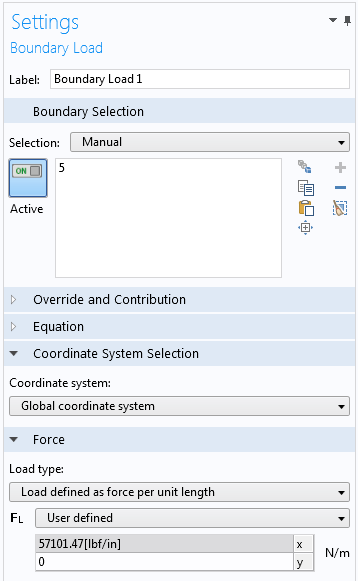 You can enter material data in a unit system other than the default by simply writing units in brackets. The same logic applies to the Geometry node. 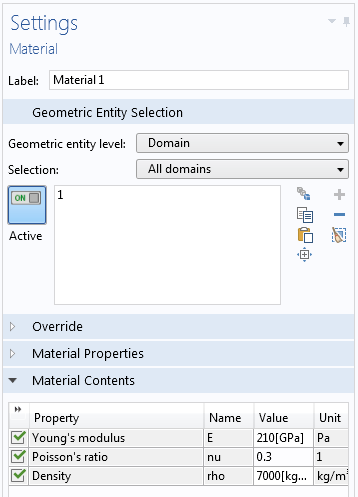 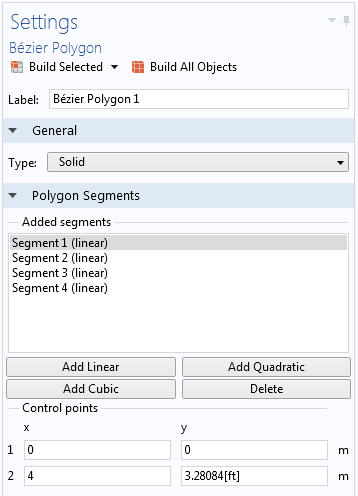 Young’s Modulus in GPa in the Material node (left) and the length in feet in the Geometry node (right).

What does the COMSOL® software do if you assign an incorrect or unexpected unit? In this case, the input display appears orange for the physics interface, physics features, and materials. An inconsistent unit can occur by summing terms with units that represent different physical quantities, such as: 273[K] + 3[ft]. A tooltip displays a message in the corresponding field.

For valid but unexpected units, the message contains the deduced and expected units in the current unit system. For a Boundary Load feature in the model discussed above, if the load is entered in kilograms, then the display of the load’s input field is orange and shows a warning message when the pointer is moved over the text. In this case, a boundary load given as 10[kg] is actually treated as 10 without units, which in the given unit system means 10[N/m]. 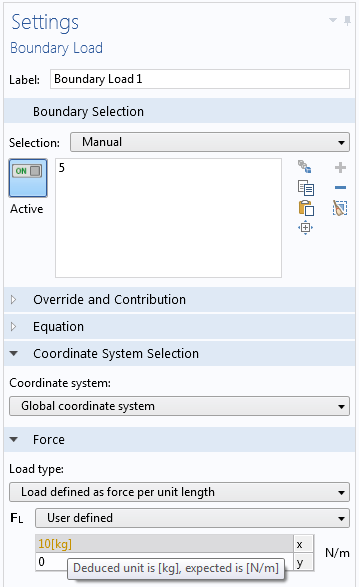 The warning message for the unexpected unit in the Boundary Load feature.

At the Geometry node, you can specify scaled or prefix metric units of length as well as the angle in degrees or radians. For specific applications, like MEMS, you may need geometry units in micrometers instead of meters, which is the default setting. However, you have to note that the length unit for the geometry does not affect the units that include the length in the physics interfaces or any other part of COMSOL Multiphysics. The material properties from the Material Library are in SI units by default, so changing the unit system of the model does not change the material data automatically.

In COMSOL Multiphysics, parameters and variables (under Definitions) can be defined in any units by writing the unit in brackets in front of numbers. The same logic applies to functions (under Definitions), where units of arguments and functions can be specified separately. The variable, parameters, and functions of different units than the model’s unit system can be used in material data and physics features.

There are many examples that show the adaptability of the COMSOL software. For example, in COMSOL Multiphysics, both names and symbols can be used for a unit. You can denote an electric current in SI units as either 2.4[ampere] or 2.4[A].