The COMSOL Desktop® is the integrated user environment for creating and managing simulations in the COMSOL Multiphysics® software. It includes the Model Builder window, model tree, Graphics window, as well as menus and toolbars with a multitude of modeling tools. In this blog post, we will show you how to customize the user interface and use a variety of keyboard shortcuts to get the most out of the modeling process.

Customizing the Layout of the COMSOL Desktop®

The COMSOL Multiphysics user interface contains a number of windows, each with its own purpose. The following windows are always present:

Of these windows, only the Messages window can be closed. There are also a number of other windows that you can open from the Window menu.

If you want to increase the size of the Graphics window for displaying a results plot, for example, you can maximize it by double-clicking at the top of the window. The window then becomes maximized and all other windows are hidden. Double-click again and the user interface is restored to the previous layout, before the window was maximized. You can maximize any window in the user interface this way.

To resize a window, click and drag the edges of the window to increase or decrease its width or height. You can also make a window “float”, or detach it, in three ways. One option is to drag the window outside of the desktop, or you can right-click the window and choose Float. Or, choose Float from the Window position menu at the upper-right corner of the window (the small downward-pointing arrow). This detaches the window, which “floats” as a separate window on the screen. You can move and resize a floating window as desired.

Some of the most important windows, listed at the start of this blog post, are not closable. To close any of the other windows, click the Close button (the cross). To open a closed window again, choose it from the Windows menu.

Let’s use the flexibility of the user interface to tile several plot windows so that you can view them simultaneously. As mentioned above, the Graphics window is permanent and cannot be closed or renamed, but you can direct your plots to separate Plot windows, a similar type of window that can be renamed and closed. By putting each plot in a separate Plot window with a descriptive name, you can create tiled plots showing different aspects of a model solution. When you make a Plot window float, you can position it on top of another Plot window, acting as the “base window”. Then, click with the mouse and the positioning guide appears. Using the positioning guide, you can tile the floating window to the right of the “base window”, for example, and continue to add more Plot windows. Shown below are four tiled Plot windows. 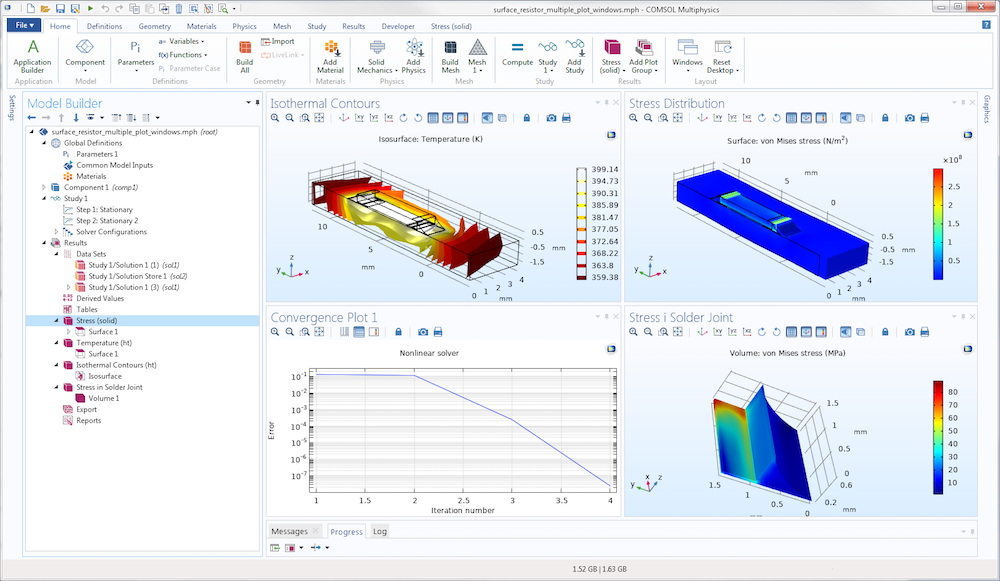 Four Plot windows tiled to show four aspects of the model solution (clockwise from the top-left plot: isothermal contours, stress distribution, closeup of the stress at the solder joint, and a convergence plot for the nonlinear solver).

Restoring the COMSOL Desktop® to a Built-In Layout

After adding and rearranging a number of windows, you might want to return to the default layout. To do so, click the Reset Desktop button. This will close any added windows and restore the size and position of the windows discussed previously.

There are two built-in layouts to choose from:

One of these layouts is always selected, and it’s the selected layout that the Reset Desktop button restores. 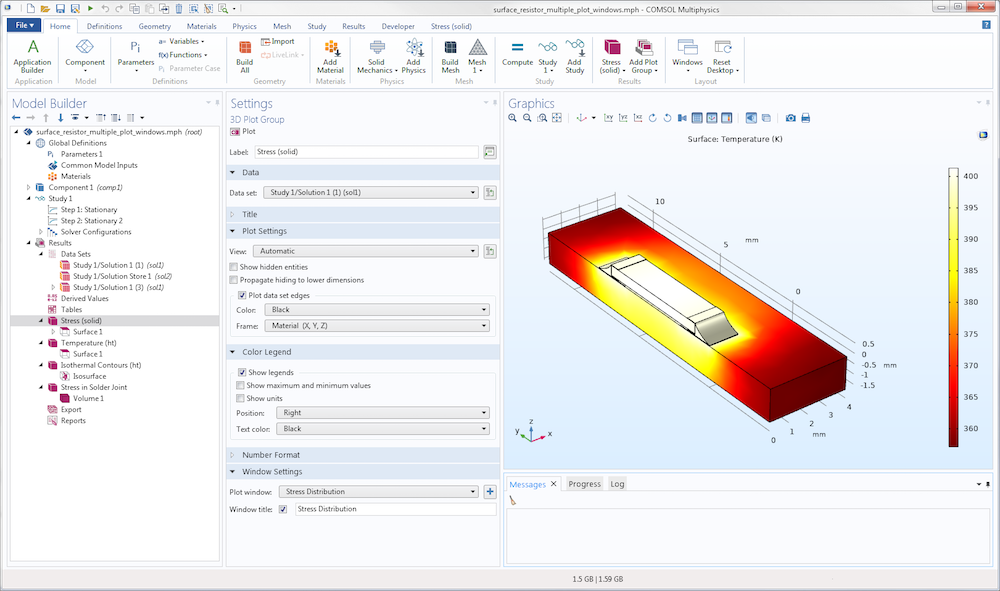 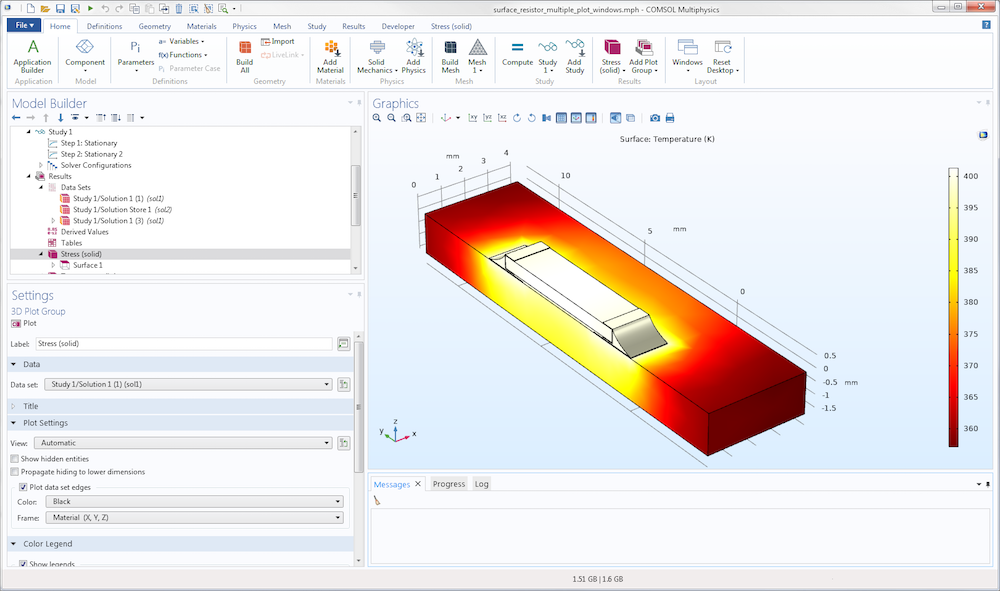 The widescreen layout (left) and regular layout (right) for a reset desktop.

The desktop appears in your modified layout until you select the Reset Desktop button. You can use this ability to keep two custom layouts with a Widescreen Layout for one purpose and a Regular Screen Layout for another purpose. For example, if your desktop computer setup includes dual monitors, you can configure the Regular Screen Layout so that the COMSOL Desktop® appears in one monitor with the Model Builder and Settings windows (and perhaps other windows of interest). You can then have a floating and maximized Graphics window fill the second window. Such a configuration can be useful for postprocessing and visualization of results. The Widescreen Layout could then keep its basic integrated environment and perhaps be used for preprocessing and setting up the geometry and physics. You can then quickly switch between the custom layouts by choosing Widescreen Layout or Regular Screen Layout.

Customizing the COMSOL Desktop® for the Linux® Operating System and macOS

Once you have learned and memorized the following keyboard shortcuts for frequently used commands and actions, they can help increase your productivity, replacing the need to use the mouse to access the corresponding functionality.

You can also use the Collapse All and Expand All buttons on the Model Builder window toolbar. The following images show the same model tree fully collapsed and fully expanded (the fully expanded image does not show the entire expanded tree).

Going to the Source

Another way to move around in the model tree is to use the Go to Source button. This button appears next to lists where you can select, for example:

When you click the Go to Source button for the data set, the focus moves to the Study 1/Solution 1 (1) data set, which is the data source for the plot.

When you choose More Commands, the Quick Access Toolbar dialog box appears. In the dialog box, you can choose commands to add or remove from the Quick Access toolbar using the Add>> and <<Remove buttons, respectively. When you select a command button in the set of active commands to the right, you can use the up and down arrow keys to change the order of the buttons. 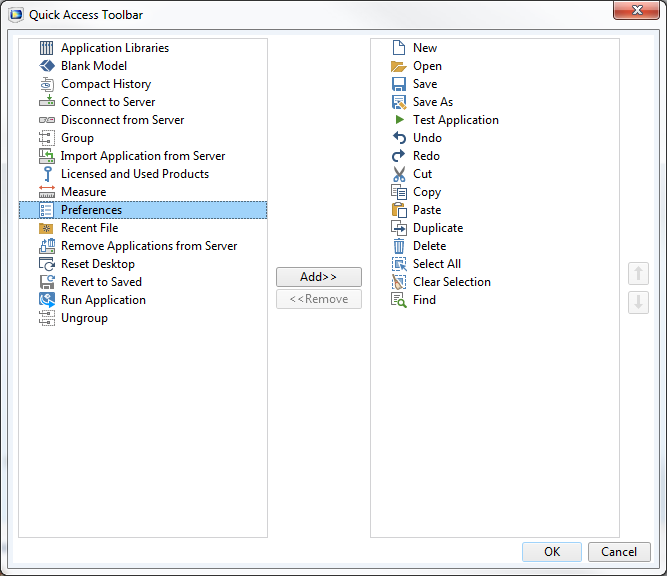 Although most of the buttons in the Quick Access toolbar have predefined keyboard shortcuts, such as Ctrl+S for Save or Ctrl+Z for Undo, you can also activate numerical keyboard shortcuts for the Quick Access toolbar. To do so, press the Alt key. Numbers representing each button then appear (see the following image). Press the corresponding number keys to activate the command for that button.

Press the Alt key to display the keyboard shortcuts for the Quick Access toolbar. Then, for example, press 2 to open a new model file.

There are many keyboard shortcuts available when using COMSOL Multiphysics. You are probably familiar with some of them from other software programs, such as Ctrl+S for Save; Ctrl+A for Select All; Ctrl+C and Ctrl+V for Copy and Paste, respectively; and the Del key for Delete.

Note: On macOS, Command+S, Command+A, and so on replace the commands using the Ctrl key on the Windows® and Linux® operating systems.

The following table includes some of the most useful keyboard shortcuts:

F1, F2, and so on are function keys, typically located above the standard alphanumeric keypad on your keyboard.

Keyboard Shortcuts for the Application Builder

When you create methods in the Application Builder, you work with the code for the methods in a Method Editor window. In this environment, the following keyboard shortcuts can be especially useful:

Using these keyboard shortcuts can help you to develop and debug methods for your simulation applications faster.

Here, we have just scratched the surface of how you can customize the COMSOL Desktop® and use keyboard shortcuts to become more productive during your COMSOL Multiphysics® modeling sessions. Explore these options to make the user interface fit your modeling needs, and try some of the keyboard shortcuts to see if they, once memorized, make some tasks faster and easier to perform.

Learn the Modeling Workflow at Your Own Pace

Learn how to use the COMSOL® software, including all of the steps of the COMSOL Multiphysics modeling workflow, with this growing series of self-paced tutorial videos and exercise files:

Take Me to the Learning Center