By design, façades are meant to be visually appealing. Aesthetics, however, aren’t the only concern. It is also important to consider elements such as stability, efficiency, and comfort. Engineers at Newtecnic use COMSOL Multiphysics to strike this balance, creating façades that are both eye‐catching and functional.

From skyscrapers to museums, iconic buildings often feature impressive and complex façades that are aesthetically pleasing. While typically recognized for their beauty, façades also play an important role in a building’s functionality, providing protection as well as visual and thermal comfort.

When developing façades, designers must consider the impact of factors such as overheating and hazardous wind flows. These elements must be analyzed quickly and accurately to meet the fast‐paced demands of the construction industry. Engineers at Newtecnic look to provide viable solutions that help companies meet specific performance targets, bringing their ideal design to life. “What we do is turn the sketch or idea that they have into a reality,” noted Carmelo Galante, a senior associate at Newtecnic.

The Federation Square in Melbourne, Australia is one example of a complex building façade that Newtecnic helped to design. Image by Donaldytong — Own work. Licensed under CC BY-SA 3.0, via Wikimedia Commons.

Simulation, as we’ll discuss next, is assisting them in achieving this goal.

At Newtecnic, engineers use COMSOL Multiphysics to study façade systems at every stage of the design process, from concept to construction. Simulations are initially run to ensure that a building’s façade is functional, while retaining its creativity. Such analyses involve comparing different façade shapes, sizes, and materials to determine the most efficient and optimal configuration. Through their studies, the team can thoroughly investigate each new design, keeping up with continuous modifications.

Once the optimized geometry is identified, the next step is to understand the physics acting upon the façade, minimizing negative effects on the building itself and its inhabitants. The engineers, for instance, use simulation to evaluate thermal comfort and performance of the envelope — factors that are especially important in warmer climates, where you want to minimize heat and solar gains, while still allowing natural light into the building. They can then use these results to create a design that ensures both comfort and natural lighting.

Investigating effects that could pose potential harm to the entire building and its surrounding area is also a point of focus. Take a recent study, for example, where the team at Newtecnic studied thermal bridging, an effect that can reduce thermal performance and cause moisture problems. The study was centered around a building façade system that included a series of self‐supporting concrete shells (shown below), which were covered with a rainscreen façade system consisting of ceramic panels. While specifically designed to mimic the building’s geometry, the panels’ unique shape significantly reduced the thermal performance, as the brackets supporting the panels generated a thermal bridging effect. 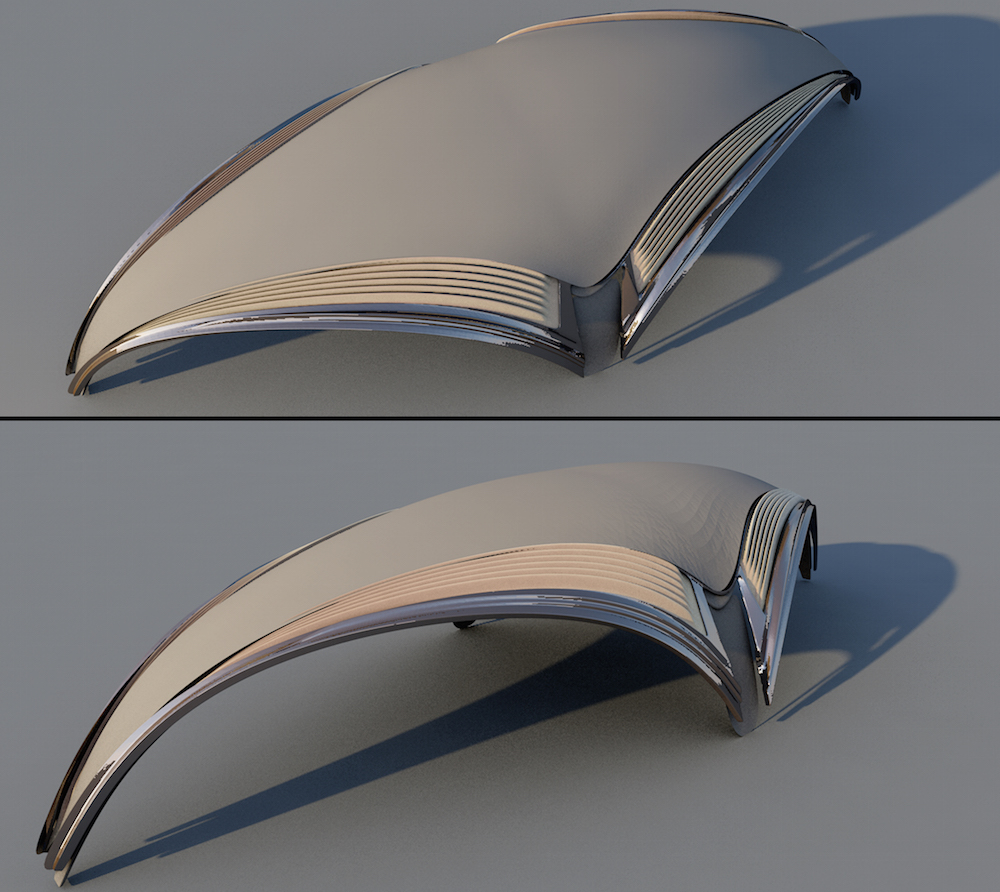 A rendering of a shell used in the building façade. Copyright © Newtecnic.

By creating an accurate model of the system, including all of the relevant components and physics, the team could address the thermal bridging effect caused by the brackets and evaluate the thermal transmittance of each concrete shell with different numbers and locations of the fixings. 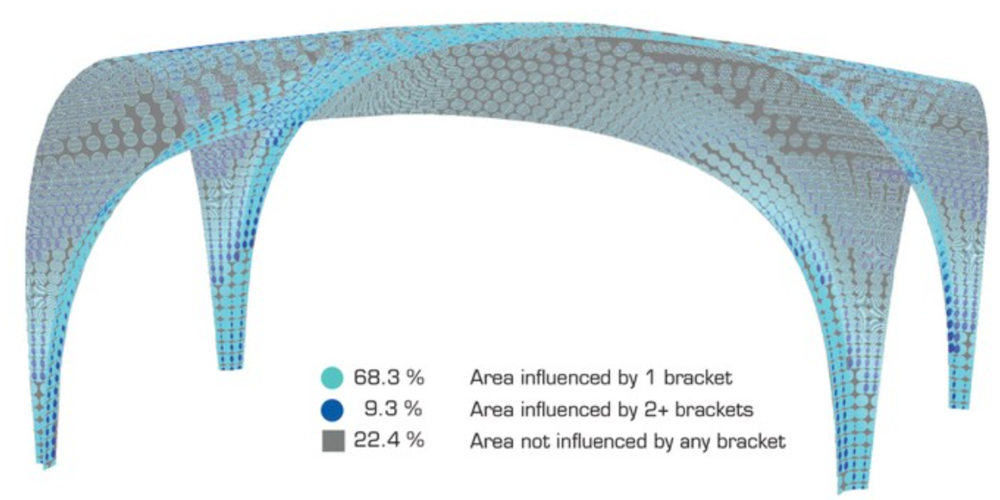 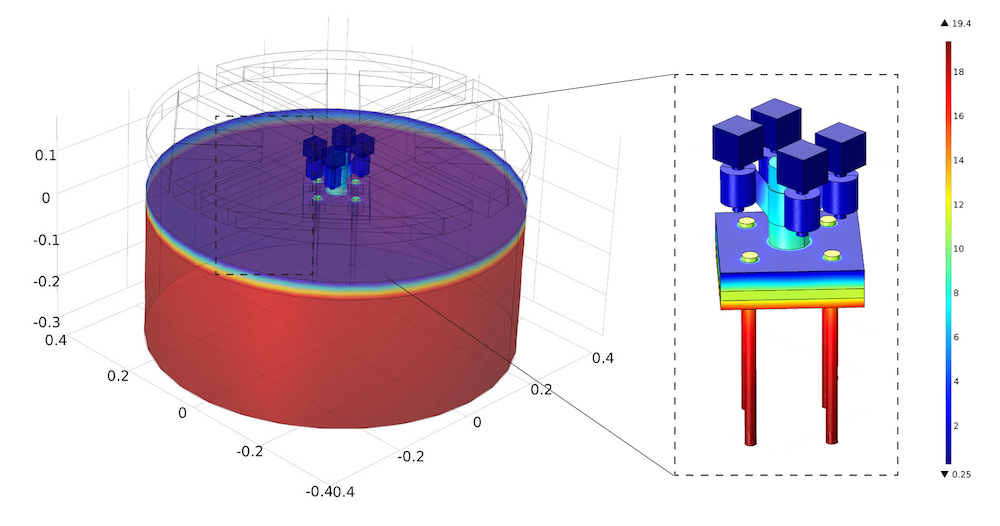 In addition to evaluating façade designs, Newtecnic uses computational studies to analyze surrounding buildings as well. This approach is particularly useful when looking at the impact of designs on wind flow. As we’ve discussed in a previous blog post, the air flowing around buildings can create strong and potentially dangerous winds beneath the structures. Properly evaluating such an effect involves the study of multiple buildings, a process that can be quickly achieved with COMSOL Multiphysics.

Utilizing the software has also given engineers the opportunity to create simulations for architects participating in design competitions. In these cases, access to a customer’s concept is usually available for a limited amount of time, from 24 to 48 hours. Simulation helps to generate fast and accurate results that meet the tight time constraints and provide the architect with useful information to submit to their client.

How Newtecnic Sees Simulation Design Evolving in the Future

Engineers at Newtecnic are already experiencing the advantages of applying simulation research to their façade designs, among other uses. As Galante notes, the construction industry has the potential to rely more and more on tools like COMSOL Multiphysics in the upcoming years. Stricter energy requirements will prompt the need for more efficient designs that require a greater number of tests. Performing such tests in a simulation‐based environment offers faster results while minimizing costs.

When it comes to apps, Galante believes that these tools will strongly influence the future of simulation research, enabling more people to quickly implement design changes and obtain results. Apps, as he notes, will also pave the way for better communication with customers, as results are presented in a simplified format that is easy to understand.