Past, Present, and Future of 3D Printing

There are many necessary steps required in order to create a superior product. Based on some initial (or existing) design, you first need to evaluate the physical characteristics of the system. Once some level of understanding of the system has been obtained, it should then be possible to refine and optimize the design based on some reasonable choice of a figure of merit for a good design. The final stage is to prototype the design, which is where 3D printing (also known as additive manufacturing) comes in. In a previous blog post, I detailed how you can 3D print your COMSOL model by exporting the underlying geometry or mesh as an STL file. This is the most basic form of 3D printing, so the question arises, how did we arrive at this stage and what does the future hold?

Until recently, the cost of additive manufacturing was prohibitive. Back in the 1990s, printers could cost up to $100k to build, and would fill up an entire room. In the 2000s, 3D printing started to gain popularity, largely due to the biomedical applications. Low-cost, consumer-friendly printers have really entered the mainstream in the 2010s and have drawn widespread media coverage.

COMSOL underwent a similar rapid growth of its interoperability products, starting with the release of the CAD Import Module in 2005. CAD interoperability is a useful, but not strictly speaking necessary, step in the design cycle. You can always use COMSOL’s own built-in CAD tools to design your product. Many businesses are, however, standardized on a specific CAD software and the designs for their existing products are readily available in this format. Realizing this, we went on to release dedicated LiveLink™ products:

These products allow for simulation and optimization of existing CAD designs using COMSOL’s powerful analysis tools. Hence they provide a convenient way of optimizing an existing design before printing a prototype.

With the release of COMSOL Multiphysics 4.3b in 2013, it is now possible to export geometries, meshes, and surface plots in the STL format for printing in 3D. This means you can conceive, design, optimize, and prototype a product using only COMSOL Multiphysics (and/or one of the LiveLink™ products) and a 3D printer. The quality and speed at which objects can be printed depends, of course, on the printer.

Low-end printers take several hours to print objects the size of a baseball, while high-end printers can maybe print two per hour. This is rather slow for mass-scale manufacturing, but quite alright for prototyping. There is no need to outsource the creation of parts to a machine shop. Printer resolution is currently around 150-200µm in the vertical direction but some high-end machines can print much finer resolutions. Although this sounds impressive, it is still not accurate enough for printing microfluidic devices whose intricate flow channels require an even finer resolution. Models analyzed in COMSOL Multiphysics typically consist of multiple materials, often some combination of metals and plastics. This places a lot of restrictions on exactly what type of devices can be printed from a practical stand-point. Metal 3D printers are starting to become available, but printing combinations of metals and plastics remains a significant challenge.

Looking into the Future of Additive Manufacturing and COMSOL Multiphysics

So what does the future hold for COMSOL and 3D printing? While I am not an expert in additive manufacturing myself, by all accounts it sounds like it is here to stay. Microsoft® has just announced that Windows® 8.1 will have native support for 3D printing, which should allow for 3D printing without having to first export the geometry and then import it into software that comes with the printer. The list of available printing materials also keeps growing, and printers continually become faster, more accurate, and cheaper. On the simulation side, we are constantly adding new machinery to characterize and optimize physical systems, and our software’s simulation capabilities will allow you to gain an advantage over competitors. Anyone can design and prototype something, but only true multiphysics software will allow you to optimize and perfect the design based on the underlying physics.

Consider a simple acoustic horn, for example. The performance of the horn depends very strongly on the shape of the horn surface. By changing the curvature of this surface, the directivity and impedance can be changed. 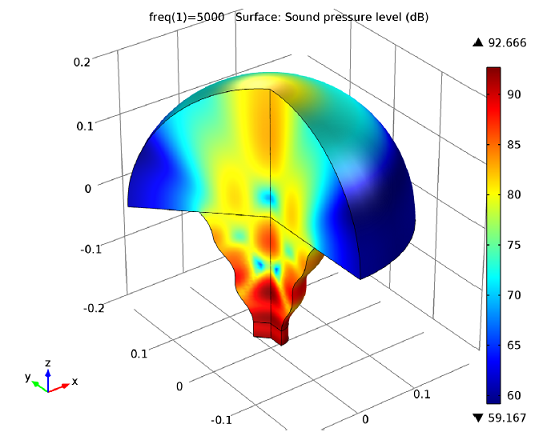 Optimum curvature of an acoustic horn.

The image above shows the optimum curvature of the horn that has been optimized so that the far-field sound pressure level is maximized for a single frequency and in a single direction. Since this could easily be printed in 3D, such a device would have superior performance over a design made with no consideration of the physics involved. (You can find more information on the acoustic horn model in the Model Gallery.)

While part of the 3D printing community remains cautious about its applicability for large-scale manufacturing, there is no doubt that this will eventually be the most convenient and cost-effective method of prototyping designs.