Predicting Deformations in a Bank Protection Structure with Simulation

Protecting Embankments near the Yangtze River 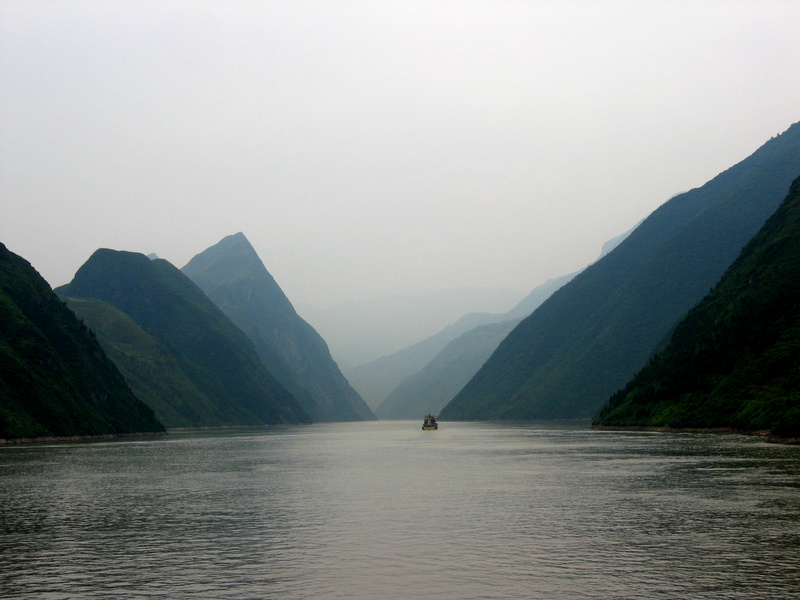 The Yangtze River. Image by Perfect Zero — Own work. Licensed under CC BY 2.0, via Flickr Creative Commons. 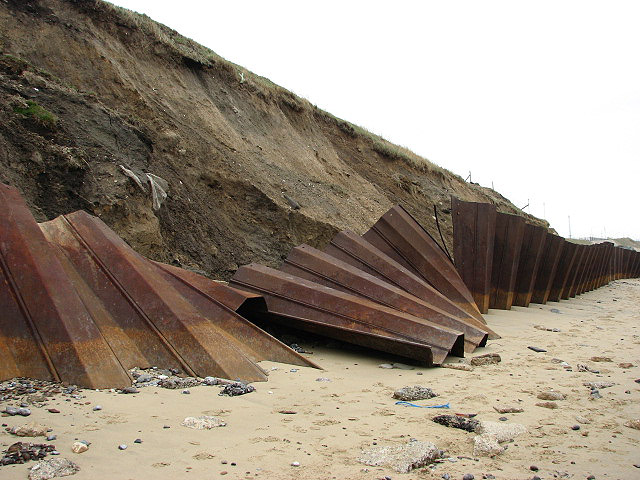 Problems can arise when these structures deform and eventually collapse due to issues like fluctuating river levels. To avoid this and maintain the safety of bank protection structures, engineers can use multiphysics modeling to predict the deformation and its causes.

With this in mind, a research team from the School of Earth Science and Engineering at Hohai University used the COMSOL Multiphysics® software to analyze the deformation of a bank protection structure in the Nanjing section of the Yangtze riverbank.

Simulating the Deformation of a Bank Protection Structure in COMSOL Multiphysics®

A bank protection structure’s deformation is affected by soil pressure from excavating riverways as well as changes in the hydrostatic (or water) pressure due to the seasonal fluctuations of the river’s water level. These fluctuations can in turn cause changes in the soil seepage field and groundwater level, affecting the soil’s mechanical properties.

Left: The bank protection structure and surrounding environment. Right: The grid of the resulting model. Images by R. Hu and Y. Xing and taken from their COMSOL Conference 2016 Munich paper.

To account for these variables when predicting deformation, the researchers created a 2D water-soil model based on the Deep Excavation model in the Application Gallery and coupled it to Darcy’s law. The model analyzes a section vertical to the bank protection structure’s steel sheet piles, shown in the left image above. The soil around the piles has three layers, based on the soil’s physical-mechanical properties. The researchers also used an ideal elastoplastic model and a Drucker-Prager yield criterion.

The bank protection structure. Image by R. Hu and Y. Xing and taken from their COMSOL Conference 2016 Munich poster.

The researchers’ model uses data gathered from monitoring the water level of the Yangtze River over 120 days as well as from four displacement monitoring points. The river’s water level fluctuations in the simulation are based on this measured data. 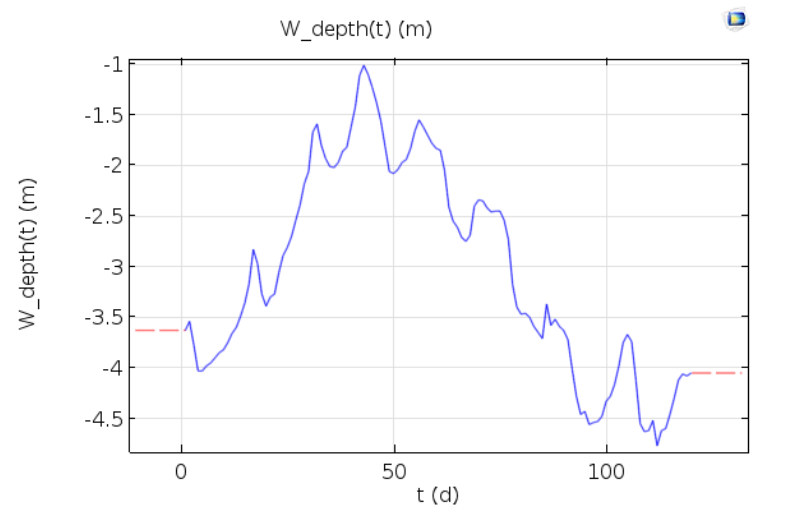 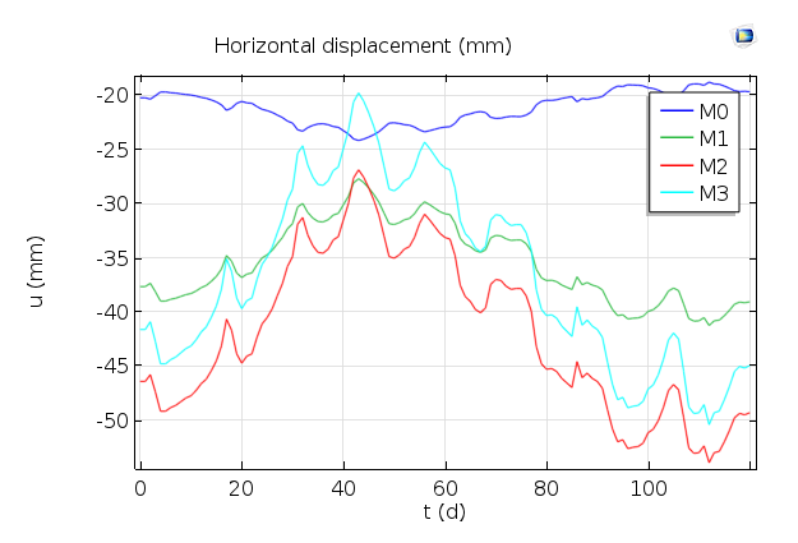 Left: The monitoring data for water level fluctuations in the Yangtze River. Right: The horizontal displacement of four monitoring points. Images by R. Hu and Y. Xing and taken from their COMSOL Conference 2016 Munich paper.

Let’s take a look at the results from this simulation.

Evaluating the Simulation Results for a Deforming Bank Protection Structure

The results show that while deformation is stable during early excavation, afterwards it is affected mostly by water level fluctuation. For example, let’s look at a few plots showing how a bank protection structure is affected by a water level of -6 m.

At this level, a water head difference on the side of the pile results in a groundwater discharge and change in groundwater level. As seen below, the total pressure varies under the water level and there is a relatively large structural displacement in the excavation’s middle part under the hydrostatic and soil pressure. The maximum observed displacement is 60 mm.

Left: The total pressure and seepage fields, with the white line representing the groundwater level. Right: The steel sheet pile’s displacement. Images by R. Hu and Y. Xing and taken from their COMSOL Conference 2016 Munich paper.

As shown below, the plastic deformation is mostly located in the soil’s first layer below the water level depth.

The structure’s plastic deformation when the river’s water level is at -6 m. Image by R. Hu and Y. Xing and taken from their COMSOL Conference 2016 Munich paper.

As a final point of interest, the team explored how extreme water level instances affect deformations. To achieve this, they used water-level monitoring data to find the Yangtze River’s highest (-0.3 m) and lowest (-8.4 m) water levels in the past 10 years. 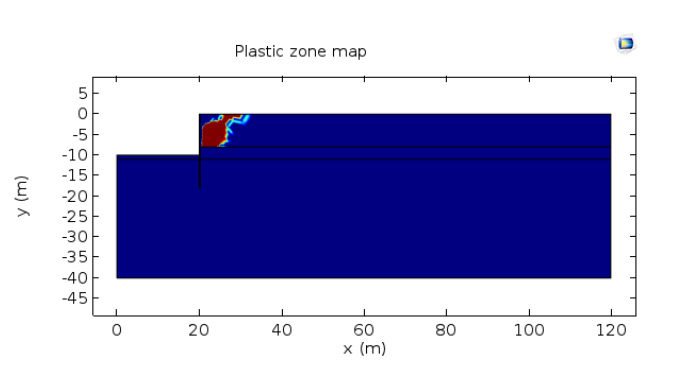 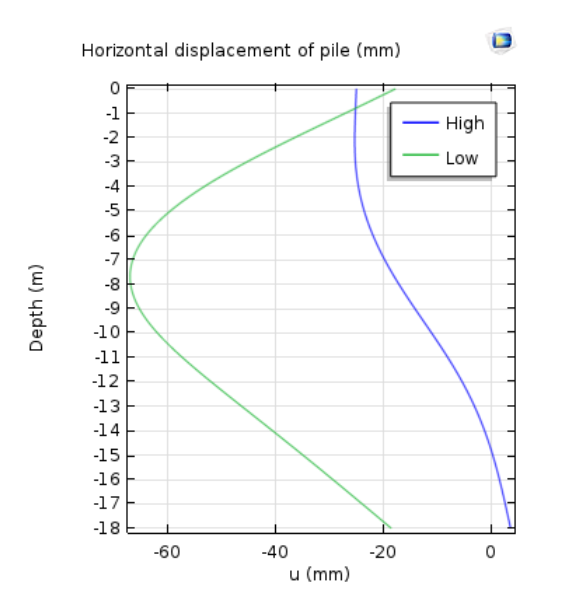 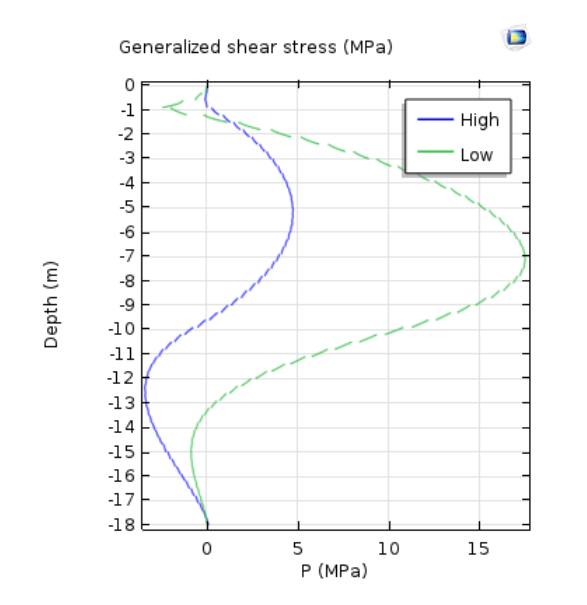 With their multiphysics model, the researchers successfully confirmed that fluctuating river levels affect the lateral displacement of the steel sheet piles in a bank protection structure and that the plastic zone distribution is related to groundwater level depth.

Moving forward, the team wants to validate and improve their model by comparing their results with long-term in situ development measurements. Through this, they hope to offer helpful suggestions to those designing bank protection structures.