You may know of Boreas, the Greek god of North Wind, but did you know that it’s also the name of a German team for Formula 1 in schools? This is no coincidence; it describes their strong will to develop race cars that are “as fast as a storm”. With this spirit and COMSOL Multiphysics, the team won several qualifying races, reached third place in the 2014 world finals, and was honored with the innovation award for Research and Development.

What Is Formula 1 in schools?

Formula 1 in schools is an international challenge. All over the world, schools can participate by sending teams of students aged 9 to 19. The goal is to develop miniature race cars made of balsa wood. After regional and national contests, the best teams meet for the world finals once a year.

To win the competition, a fast car is of course important, but it’s not the only criterion teams are judged by. Teams are also judged by how they designed and developed the car. For the development process, the students are encouraged to make use of modern 3D modeling tools, as these play an increasingly significant role in research and development (R&D) departments. Besides building up a sound knowledge of aerodynamics, structural mechanics, and manufacturing, the teams are also supposed to find sponsors, set up a finance plan, do marketing, and present their work.

About a year and a half ago, the Formula 1 in schools challenge was introduced at a school in Iserlohn, Germany. Five motivated students at the school joined together to form team Boreas. Here they are:

After qualifying to enter the competition, the team’s success story continued as they won a regional contest. Winning this contest led them to the national finals in Germany, where they again reached first place. The judges were especially impressed by their strong presentation skills, which is a major part in the challenge’s rating system.

The car, however, still needed a lot of improvement to compete against the world’s best teams at the finals in Abu Dhabi in November, 2014. With this aim, Nick, the design engineer, decided to use COMSOL Multiphysics for topology and design optimization. Their results not only led to a competitive car, but impressed the judges in such a way that they gave team Boreas a special award for Research and Development.

Using COMSOL Multiphysics for Topology Optimization of the Wheels

For the regional and national finals, the team had already learned a lot about how the wheels influence performance. They had, for example, figured out that the thermoplastic polyoxmethylene (POM) performed well in terms of weight and stiffness. They also knew that this material wouldn’t lose particles on the track, a phenomenon that would cause the car to slow down and finish with a worse race time.

With COMSOL Multiphysics, the team wanted to find the optimal design of the wheels by means of optimization techniques included in the software. The aim of a topology optimization, in general, is to distribute the amount of material used in a given initial design domain such that the weight is minimized. In practice, many restrictions exist due to the requirements of the milling machine the team used for manufacturing. One could include all these restrictions as constraints into the model, but the team chose a more straight-forward and computationally efficient route.

In the first step, they just wanted to find out the optimal design of the connections from the axis of the wheel to the running surface. To this end, they set up a 2D solid mechanics model of a wheel and applied a boundary load of 1 MPa to the whole circumference of the running surface. The material properties were taken from POM with a density of 1,400 kg/m3 and Poisson’s ratio and Young’s modulus of \nu = 0.35. They chose a rather coarse mesh resolution of the simulation domain in order to get an initial idea of how the connection should look.

In the following figure, we can see the initial design domain at the left and the final result of the material distribution to the far right. In between, there are some intermediate results of the optimization process. 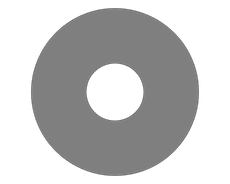 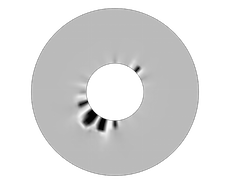 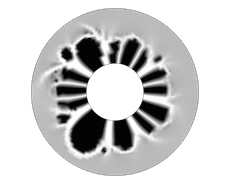 Visualization of the topology optimization process (from left to right).

The results indicate that the optimal connection from the axis of the wheel to the running surface is not simply straight, but shows two branches near the surface. With this idea in mind, the team went over to a 3D COMSOL Multiphysics model of their wheel. In the second step, they did not run a topology optimization, but parameterized the geometry as detailed as possible, such as the branch angle, number of spokes, inner and outer diameters, and several other distances. They then applied an optimization study again, letting the COMSOL software vary all the parameters in a realistic range with respect to manufacturing, physics, and the rules of the competition. The optimized wheel proposed by COMSOL Multiphysics has the following shape: 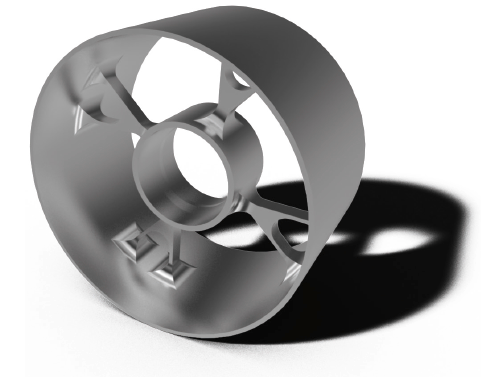 All in all, the team could now save a significant amount of material and at the same time ensure that the wheels wouldn’t break during the race. This led to a much faster and more competitive race car for the Formula 1 in schools challenge.

Another part of the car the team focused on was the rear wing. Boreas used COMSOL software to optimize the spoiler profile in a fluid flow simulation based on the Reynolds averaged Navier-Stokes equations to model turbulent flow of air over the spoiler.

In this simulation, the initial profile was a combination of two ellipses with the two major axes chosen as control parameters. These two parameters basically influence the length and the shape of the profile at both sides. The following graphics show the whole simulation domain and a sketch of the two free parameters for the optimization.

You may wonder why this type of design domain was chosen, as it does not produce any downforce. Here, it is important to explain some details regarding the conditions of the race. First, the miniature race cars drive without any classical engine; they are instead powered by a gas cartridge — imagine a rocket as a comparison. Second, the race track for the competition is straight and the cars are additionally kept on track by some sort of guiding line threaded through the car. With this setting, team Boreas came to the conclusion that the rear wing in this competition does not have the same impact as it does for regular-sized race cars on a normal race track. The most important result here is minimum drag force, i.e., a rear wing that disturbs the air flow as little as possible.

The optimized result provided by COMSOL Multiphysics proposes a longer, rather pointed left end and a shorter, less pointed right end of the profile:

Here is the final design of the team’s race car, “The Storm”: 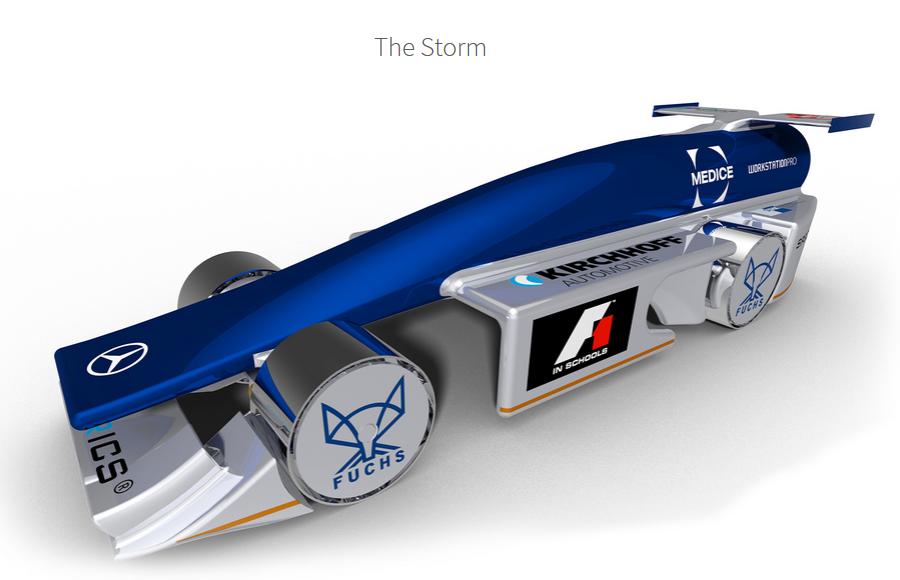 Left: Final shape of the rear wing with the optimized spoiler profile in the flow direction, as per the team’s results using COMSOL Multiphysics. Right: Full design of the race car.

What Does the Future Look Like for the Students?

The months after the world finals were quite busy for team Boreas, as they were invited to lots of events and needed to catch up in school at the same time. It’s important for them to support new teams in Germany in order to give them the chance to continue their success story. Of course, this outstanding experience also affects the future of the team members.

When graduating high school, it is advantageous to have prior experience in R&D and a good understanding of the technical and economical aspects of a project. The students leave school with much more self confidence, too. Nick, for instance, is just about to finish the German Abitur and has already signed a contract for a dual study program at a prominent company. It’s very likely that he will continue to work with simulations in the future. The team leader, Peter, has decided to study industrial engineering, while Benny now studies technical cybernetics and Katja has plans to become an architect.

In other words, the future looks bright for the students. Congratulations on your success, team Boreas!

If you are feeling inspired by the success of team Boreas, check out these resources to learn more about how you can use COMSOL Multiphysics for optimization purposes: 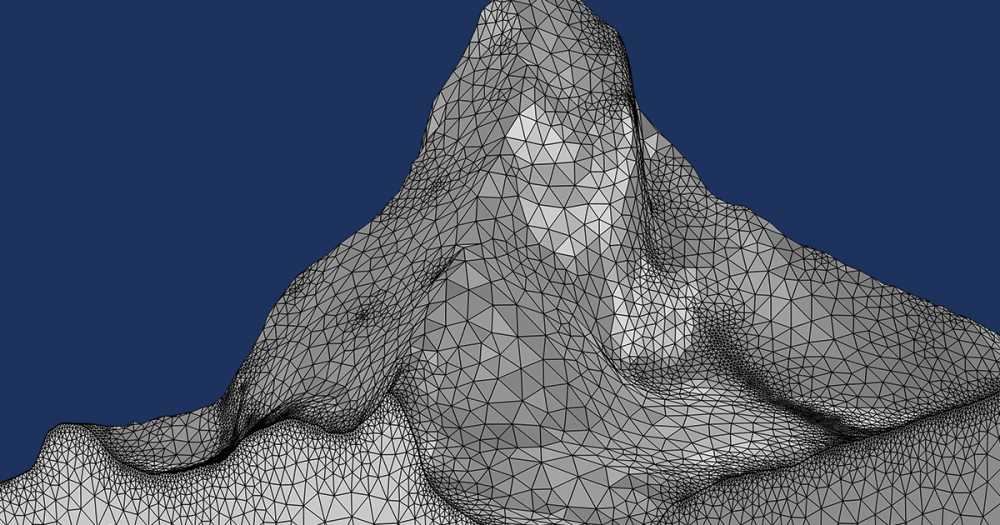 How to Build Geometries from Elevation Data to Model Irregular Shapes