Given the title of this blog post you might expect it to be about global warming, and I won’t blame you for it; greenhouse effect has become another popular term used when debating climate change. However, its original and literal meaning refers to a very different process, in particular when it comes to heat retention. Here we will describe the effect of heating up an actual greenhouse and suggest steps for optimizing its design.

How the Greenhouse Effect Works

Let’s suppose your neighbor wants to grow some plants and enlists you to construct a greenhouse that keeps them from getting cold in the winter but without overheating in the summer. Before optimizing the greenhouse itself, we obviously need to understand how the greenhouse effect works.

In short, greenhouses retain heat via solar radiation and by keeping the warm air enclosed, but let’s not leave it at that. When the sun shines on the greenhouse, heat enters through the glass in the form of short-wavelength infrared (IR) light, and in turn heats up the ground. As we all know, warm air rises, and that’s just what happens when the air closest to the ground heats up. Next, cooler air replaces the warm air at ground level, and then that begins to heat up too, in a continuous cycle. This is also known as convection. 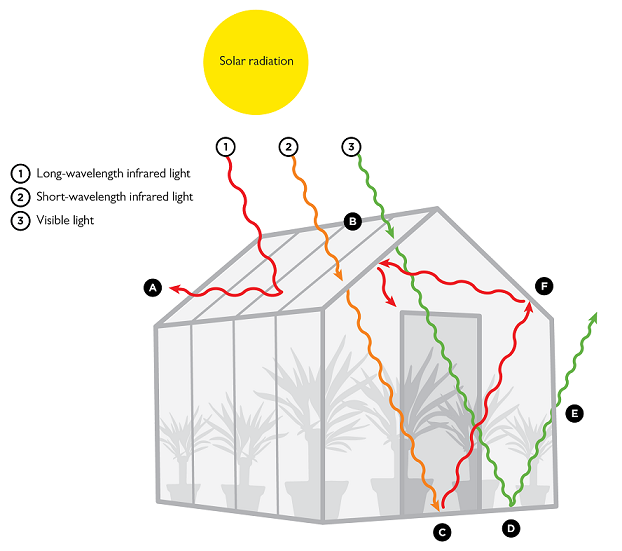 Optimizing the Performance of a Greenhouse

There are four main parts necessary for operating a greenhouse. These include a frame, covering (glass, for example), flooring, and ventilation. That’s right — ventilation. While the typical goal of a greenhouse is to keep plants warm, we do need to watch out for overheating. Vents are commonly added both at the top of the structure and at the bottom. This allows the hot air to exit up top, and cooler air to enter closer to the ground. For the covering, we don’t necessarily have to use glass, but this material lets in around 90% of the sun’s radiation — a desirable trait in this scenario.

Did you know you can simulate radiation through glass (and any other media with a refractive index other than 1, for that matter) using COMSOL Multiphysics along with the Heat Transfer Module? That feature was released last year with version 4.3, and we wrote about it here in a blog post on “Heat Transfer, Accounting for the Radiation of the Sun“. If we were to optimize our greenhouse, a good first step would be to simulate it, and the Heat Transfer Module would certainly come in handy. With its solar positioning feature we can define an external radiation source for all interfaces (including surface-to-surface radiation, like our greenhouse), in 3D. That means we could define the intensity and direction of the sun’s radiation based on the greenhouse’s position on Earth, the date, and the time of day.

Our simulation would then answer questions such as “How hot does our greenhouse get?”, “At what point in time is it hottest? Coolest?”, and so forth. This could be a fun project for you to test out on your own. (And if you’re new to COMSOL, check out our list of upcoming free workshops to get started using our software.)

I know that some advance building thermal control software had 2 wavelengths, with 5 COMSOL stretches itself really further.
Definitively a pluss for HT and clean-tech simulations